SAMKA arrives in Chile: an art and performance meeting on ancestral knowledge, traditions and cultural expressions

Between April 22 and 28, SAMKA arrives in Chile with a new version at the Matucana 100 Cultural Center in Santiago, at the Valparaíso Cultural Park and at the Cultural Center of Spain in Santiago, where performative ritual actions will be carried out for the International Earth Day. 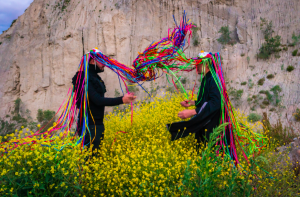 SAMKA is an artistic initiative supported by Fundación Mar Adentro, among other organizations, which is made up of two main axes: the study of migratory flows and the study of ritual acts and artistic expressions that accompany them. SAMKA carries a message of optimism by building connections between migrant communities through the symbolic recovery of their dreams and hopes, as well as establishing a link with their roots and ancestral beliefs.

This version of SAMKA expands the analysis of the rural exodus towards migratory and territorial dynamics, observing the cultural and social syncretism visible in the music and audiovisual arts that result from these phenomena. SAMKA is divided into three stages, firstly it offers a meeting space between representatives of different migrant communities and the community of artists that hosts the project, where it promotes exchange processes of ancestral knowledge, traditions and cultural expressions that participants bring from their roots.

Then begins the stage of creative development during which intimate testimonies are recorded, artworks are made and performative and ritual actions are coordinated to take place in the installation to be carried out in Matucana 100. Under this premise, the articulators of these meetings and of its audiovisual record is the Itinerant Network KolKultura, organizer of the Migrant Carnival, and the Nelson Garrido Organization – NGO.

SAMKA will be presented at the Esplanade of Matucana 100 with an immersive experience, from April 22 to 24, 2022. On opening day, a series of performative ritual actions will be carried out to awaken the earth in the context of International Earth Day . The public will be able to participate in this activity together with the SAMKA team.

On Saturday April 23 SAMKA will present its central proposal with a ritual performance on the esplanade of Matucana 100. And it will say goodbye to Santiago with one last action: Apthapi SAMKA, at the Cultural Center of Spain in Santiago, on April 25. This collective celebration invites us to dialogue and find one another through food. Due to capacity issues, this activity will be attended by representatives of the project’s allied institutions, the press, artists and guests. Apthapi SAMKA will be moderated by SAMKA’s curator, Joaquín Sánchez, who was also the curator of the last three versions of the Bolivian Biennial.
Finally, SAMKA will travel to the Valparaíso’s Cultural Park, where a series of performative ritual actions will be carried out on April 29 and 30, 2022.

SAMKA is an initiative that will be carried out in Chile thanks to the National Fund for Cultural Development and the Arts (FONDART) of the Ministry of Cultures, Arts and Heritage of Chile. With the support of the Mar Adentro Foundation, the Spanish Cultural Center in Santiago, the Matucana 100 Cultural Center, the Valparaíso Cultural Park and the Bolivian Consulate in Chile.

It should be noted that the first exhibition of SAMKA was held in 2018 at the Espacio O gallery in Santiago, where a series of performative actions were presented, and later replicated in the rural space of the community of Santiago de Llallagua in Bolivia and in the urban space of Santiago de Chile, creating a metaphorical mirror between these two realities. This first version was born from a research trip to Llallagua, where rituals linked to the ancestral knowledge of this Aymara community were recorded. Afterwards, new artistic and social expressions resulting from the exchanges between rural and urban cultures were studied.

In 2019, a tour was made to Fundación el Instante in Madrid, Spain; to the Manzana de las Luces cultural space in Buenos Aires, Argentina; and to the Museum of Tomorrow in Rio de Janeiro, Brazil, curated by Keina Eleison, director of the Museum of Modern Art of Brazil. And it was from these experiences that SAMKA was recognized with the national award for the best contemporary art project by the Bolivian Ministry of Culture.