Sound Investigations in a Forest of the Araucanía

A digital conversation with sound artist Sebastián Jatz on December 17 at 5pm. 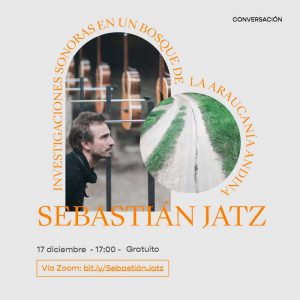 In this conversation, Sebastián Jatz will explore his work in depth, especially regarding the results of his sound investigations recently carried out during Fundación Mar Adentro’s Bosque Pehuén Residency Program, a conservation area in the Araucanía Andina. There, Jatz continued his research on human sound as shadow and the sounds of the world, such as wind, water, nature (and its analogy to light), generating sound records to create a kind of map/puzzle in Bosque Pehuén. The event will take place on December 17 at 5pm via Zoom, at: bit.ly/SebastiánJatz.

Sebastián Jatz (Santiago, Chile 1980) is a composer, translator and bell ringer. Jatz has performed various individual and collective site-specific interventions that use various experimental sound sources, intersecting timelessness, various disciplines and reflections from literary, philosophical and even religious perspectives, with a critical and autonomous perspective. Simultaneity, an expanded notion of music in extended space and times, the collective and the metaphorical, are constant axes of his proposal. He has developed large-scale projects such as arsomnis, Musicircus, Reunion and ASLSP by John Cage; as well as his own projects such as Cien Acordes Geométricas Extendidos, among many others.

In addition, Sebastián Jatz will participate with a piece (on December 21) in the XIV Festival de Arte Sonoro TSONAMI, which will take place between the 11th and 21st of this month. The event’s program consists of works commissioned specifically for the festival as well as others selected from an open call, which brings together 176 creators from Chile, Latin America and the world, with over 80 works/transmissions, and with live and pre-recorded broadcasts. This edition will be broadcasted continuously during 11 days, 24 hours a day, and will be accessible from Radio Tsonami’s website and the following platforms: Radio CASo in Argentina, Radius in the United States and P-Node in Europe.