The Networks Cycle, which took place between March 22 and April 25, had four participants: Constanza Monterrubio (biologist), Claudia Müller (visual artist), Emiliano de la Maza (industrial designer and sustainability educator) and Jasmin Märker (visual artist), who from different perspectives carried out research on the cultural memory of food, explorations with ceramics to deepen her artistic practice on water cycles and its relationship with dead woody debris within a forest, biosculptural experiments, and the application of knowledge of the forest in the regeneration of empty plots of land. 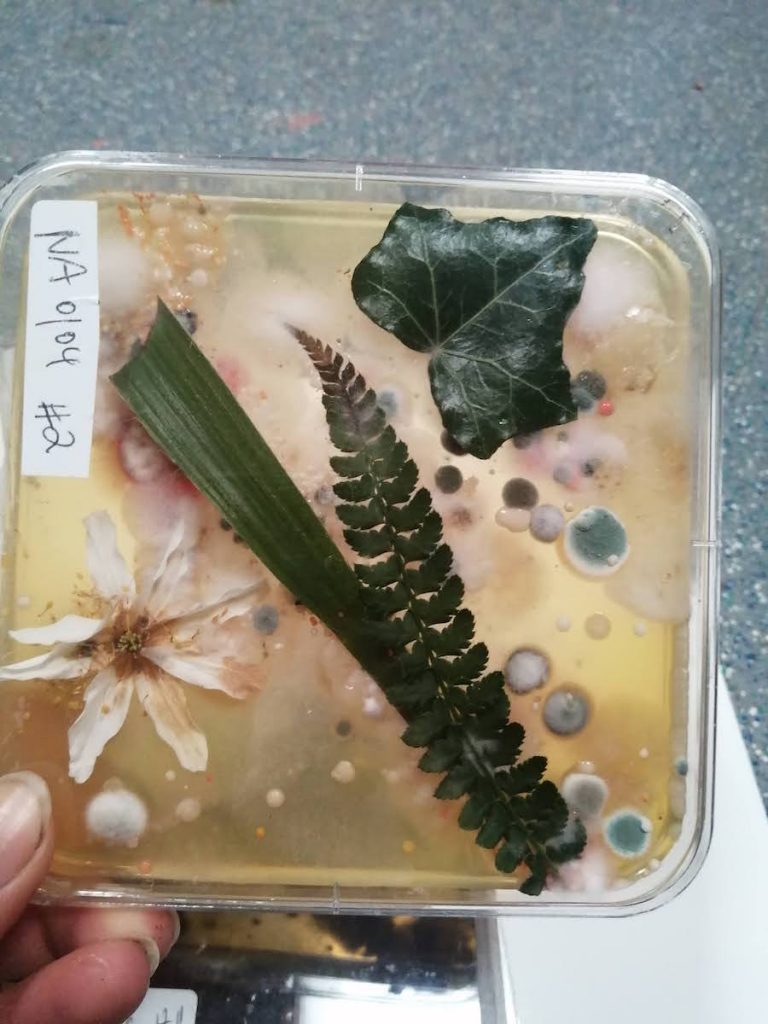 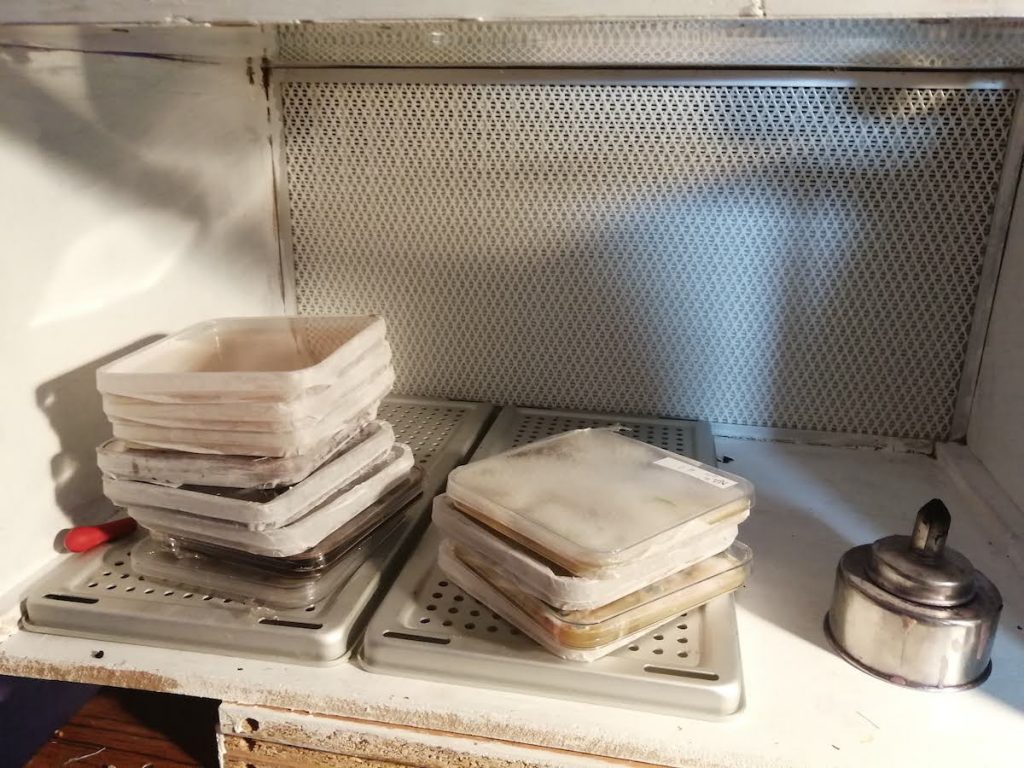 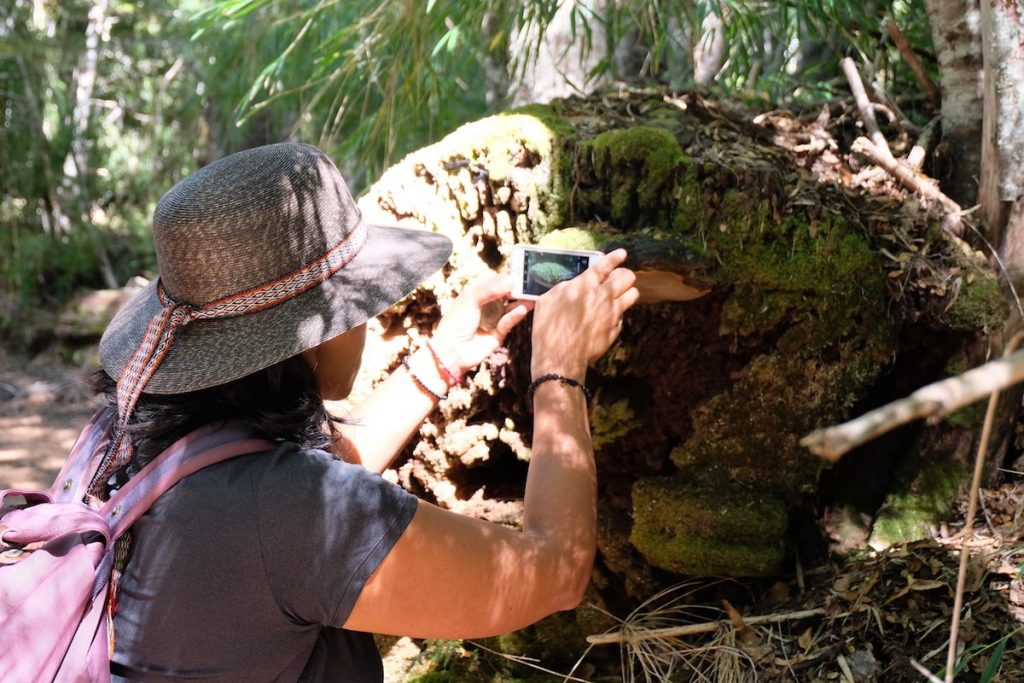 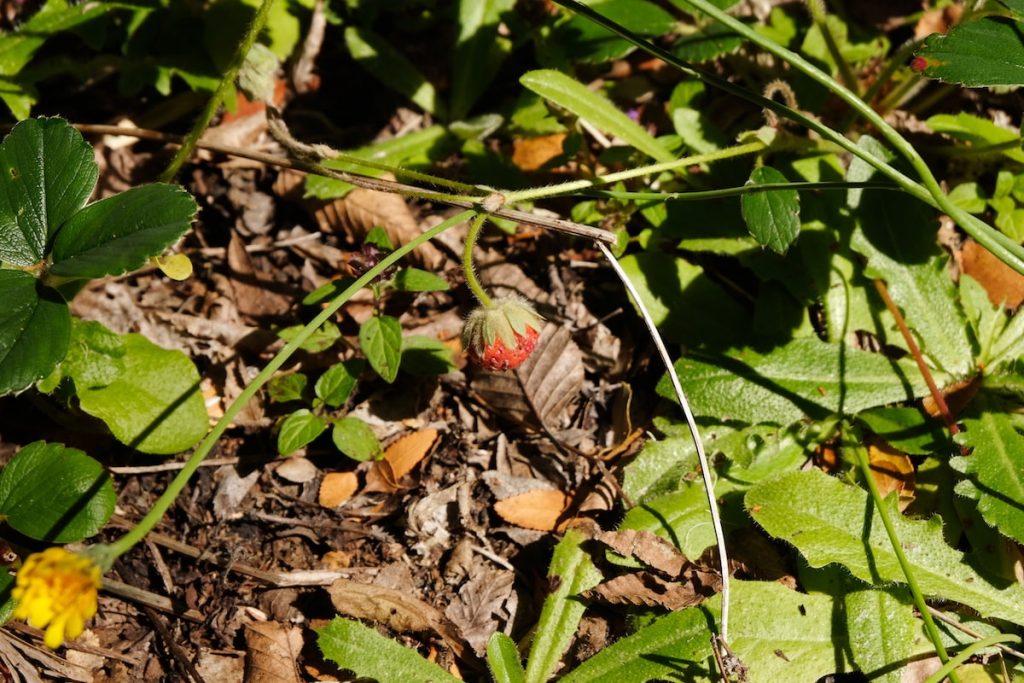 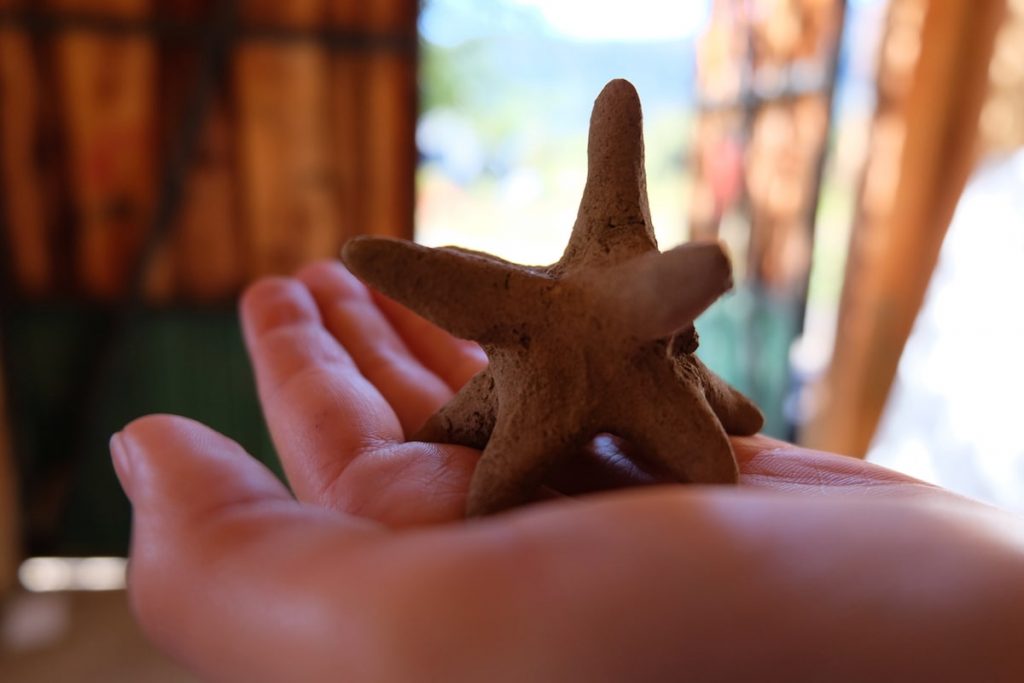 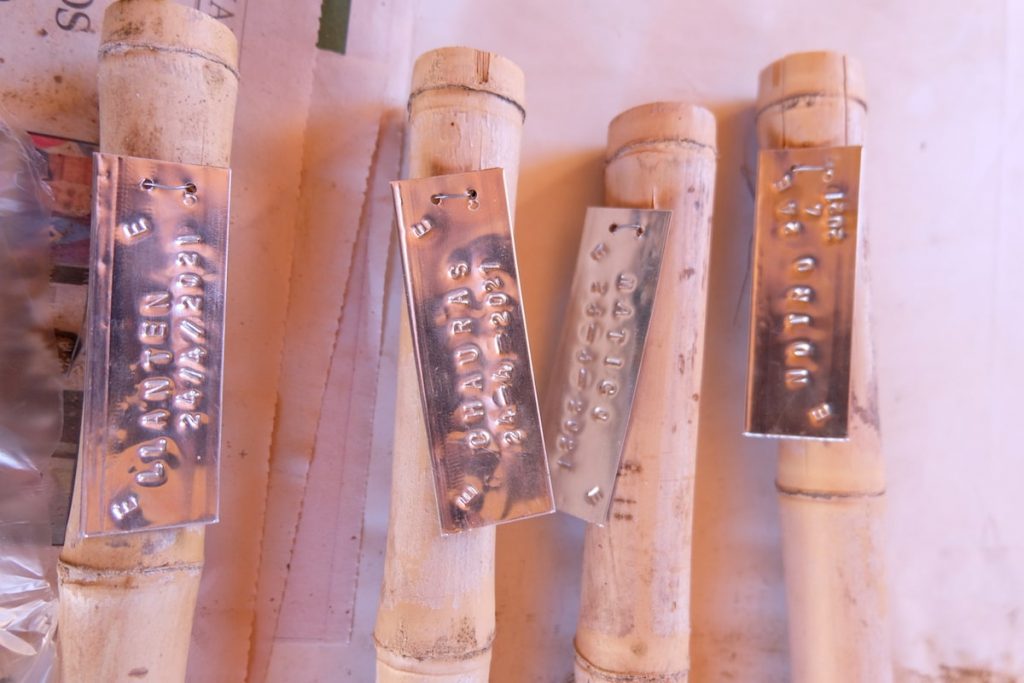 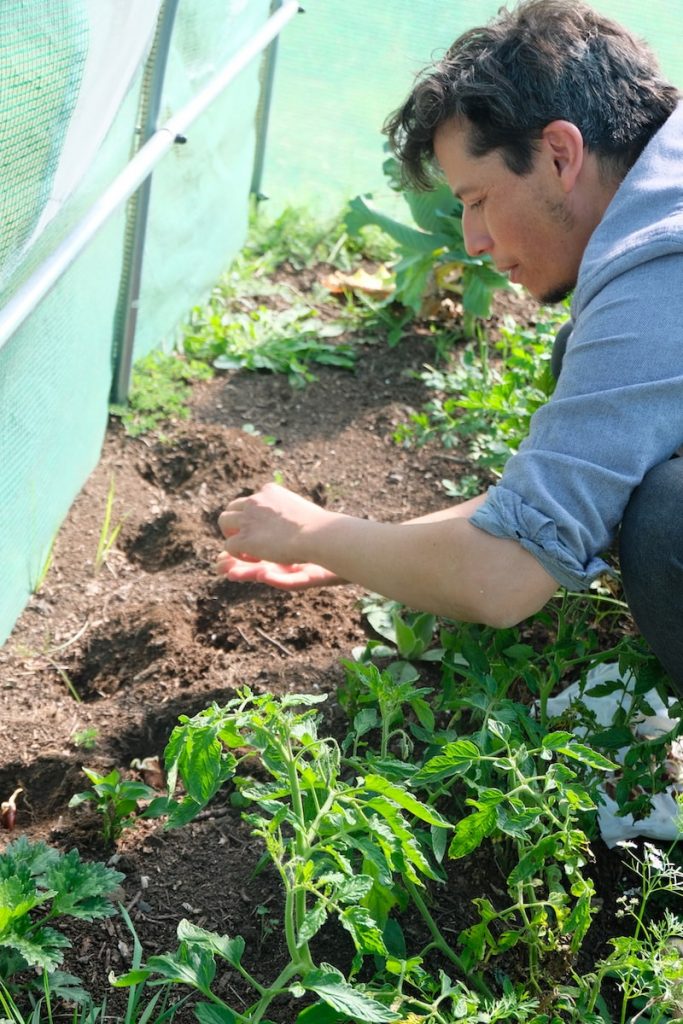 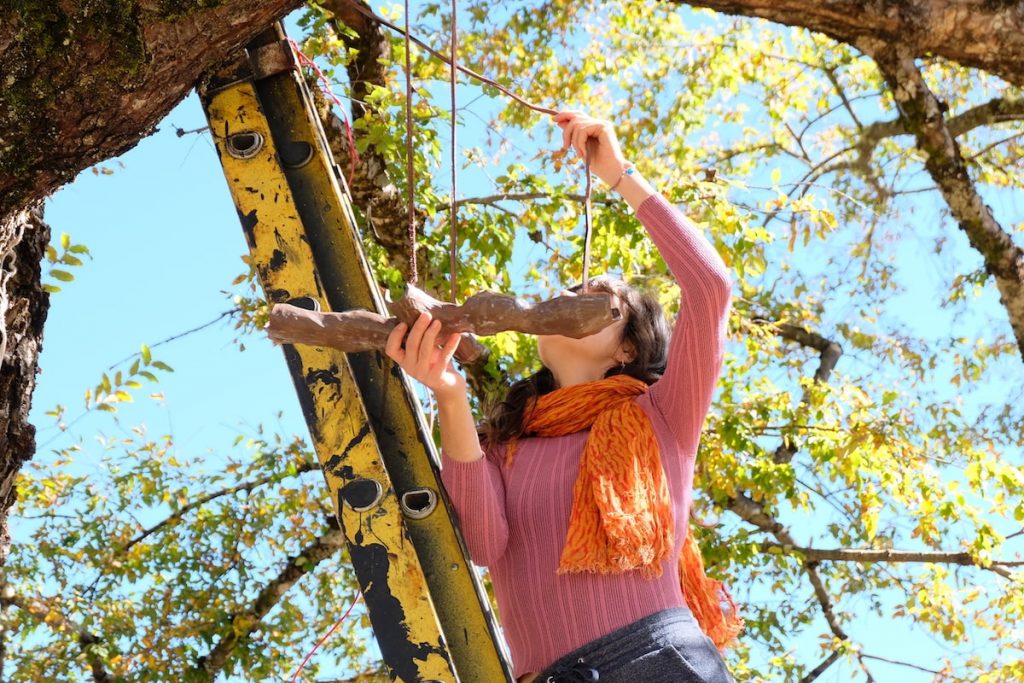 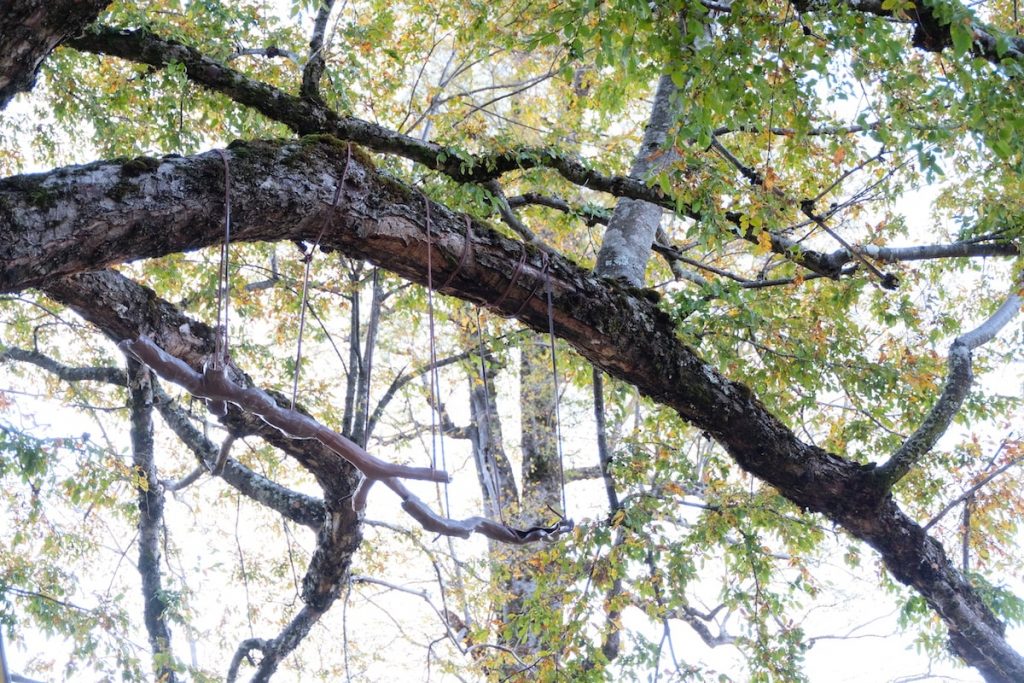 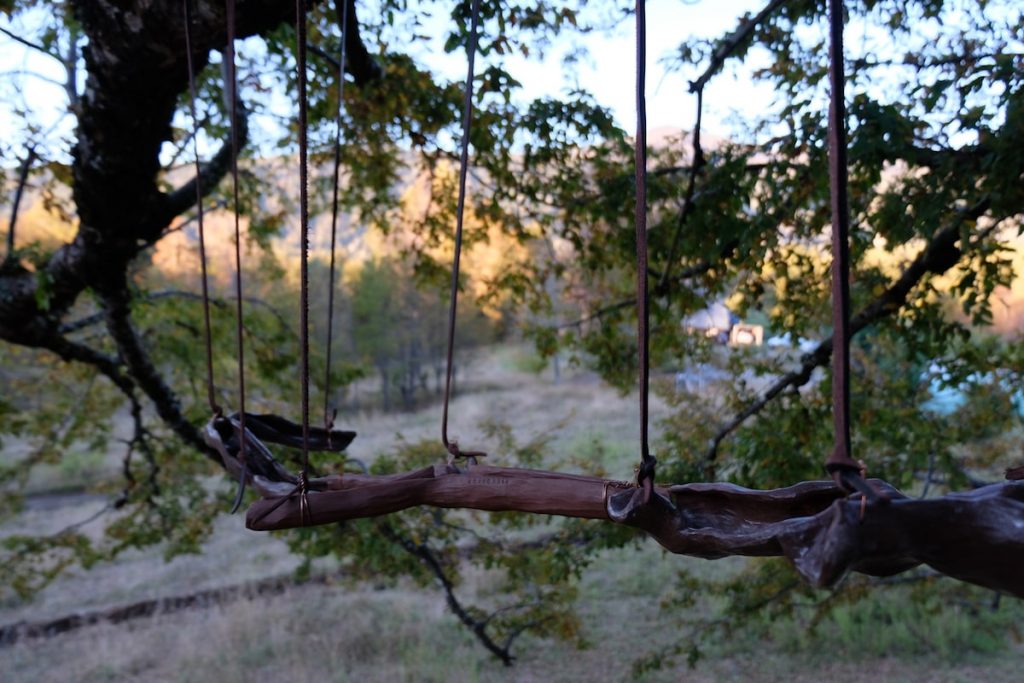 Within the general theme of “networks” for this cycle’s curatorial framework, each of the residents –three of them in Bosque Pehuén and one of them from Ireland– carried out research from different perspectives and disciplines, manifesting their interpretations via an interest for understanding water cycles in a temperate rainforest, mycorrhizae and their role in soil regeneration, and also, under an educational and community-focused approach, bio cultural heritage and the knowledge of nature.

The program considered an immersion in nature with excursions led by our Park Ranger, Álvaro Escobar, along the different trails of Bosque Pehuén, as well as instances of exchange between the residents themselves, and dialogue sessions with different local actors both virtually and in person, including: Isidora Huici, soil regeneration expert, and who also conducted a soil chromatography workshop for residents; glaciologist Carlos Mendoza, who gave a talk on climatology and geomorphology; members of CONAF (National Forestry Corporation and and administrators of the National Parks of Chile), to address issues revolving invasive species in conservation areas; cultural agents; as well as different members of the Foundation’s team.

Regarding the investigations carried out by the residents, Mexican biologist Constanza Monterrubio investigated the wild flavors that the forest provides, seeking to make visible the cultural and nutritional value of wild foods present in the Araucanía. In this way, she explored and tested recipes and flavors with her co-residents created off of ingredientes found while foraging in the forest –such as wild strawberries, mushrooms (changles and yellow dock or Fistulina antarctica), chaura and Araucaria pine nuts–. In addition, with Mariana Martínez from Collaboratorio Cocina, who conducts collaborative art and science works in Chiapas and Oaxaca, they shared thoughts about different ways of making the biocultural heritage of a territory visible from art and design. In a near future, when the sanitary conditions permit further activations, Constanza will be publishing a publication to activate workshops and encounters between farmers, and will prepare a sound record of testimonies from the different women with whom she is currently working in her post-doc research to devise ways of exposing this knowledge from the arts.

From her workshop in Ireland, due to travel restrictions caused by the pandemic, German visual artist Jasmin Märker remotely explored the ecosystems of Bosque Pehuén and the relationships between species, to understand the human and non-human interrelation and how conservation strategies remedy the effects of environmental destruction. Throughout the program’s five weeks, Jasmin partook in virtual meetings with local actors and with her co-residents, developed a series of biosculptural explorations based on 3D modeling, agar plates, soil collection and fungal cultures with the aim of creating a new body of work.

Visual artist Claudia Müller, meanwhile, deepened her interdisciplinary exploration of water through an exploration in ceramics and audiovisual/sound recordings. Throughout the five weeks, she generated an audio and audiovisual record (with a hydrophone) of the unknown worlds under water and created ceramic pieces from molds of coligüe, raulí, and araucaria branches, which ended in the mounting of a first site-specific artwork prototype, to then, in a later phase,  carry out a work composed of these ceramic pieces hanging from the branch of a tree, in order to generate small containers of water and observe how they transform over time and host birds or microorganisms, an analogy of how woody debris can bring new trees to life in the forest.

Claudia, also gave a workshop for first-year Art Bachelor students from the Catholic University of Temuco, as part of the Foundation’s collaboration agreement with said university. In this workshop, which included two sessions with 40 students, she presented her work and key references of the art and ecology scene, and then conducted exercises in collective work-groups based on 3 key concepts: collection, time, and the body-work relation.

Industrial designer and sustainability educator Emiliano de la Maza studied the regeneration of soils in wild places instigated by human intervention and the knowledge that this phenomenon contributes to urban agriculture practices, in order to connect ancestral knowledge with urban questions. In his last weeks in residence, he developed a prototype for seed bombs with native species of notro, llaiten, matico and chaura. These seed bombs were deposited within a clay structure made with local soil and created in the shape of a pimpernel, thus being inspired by the design of this plant, a pioneer in regenerating the empty spaces present in Bosque Pehuén as a result of forestry interventions carried out in the 70s. In a second stage, this experiment will give way to workshops in for local schools that will address nature-based design for regenerative purposes.

Constanza Monterrubio (Mexico, 1982). A biologist from the National Autonomous University of Mexico (UNAM) with a postgraduate degree from the University of Kent, United Kingdom, who has dedicated herself to the study of collective processes for the management of natural assets in community and indigenous conservation areas. As part of her passion for the biological and cultural diversity of Mexico, she worked for several years in Pronatur Sur, Chiapas, supporting voluntary land conservation processes. She is currently doing a post-doctorate at the Pontificia Universidad Católica de Chile in Villarrica, exploring the aspects of biocultural memory that allow family farming to respond to and resist the processes of homogenization of food systems.
+ INFO

Claudia Müller (Chile, 1983). Visual artist with a degree in art from the Finis Terrae University and a Master of Arts from the University of Chile. Her work is inspired by the daily observation of how natural forces occur on materialities such as water or air, cyclical movements, and the association with objects of an industrial nature, which she later records through photography, video and installation. Her work has been exhibited both in Chile and abroad, including the following solo shows: “Fuente”, Museo del Hongo, IV Biennial of Medial Arts, 2019; “Vaivén”, CCU Art Room, Santiago de Chile, 2018; “Menguar”, Regional Museum of Punta Arenas, Chile, 2017 and “Nobody can push the river”, Fundación BilbaoArte, Spain. She has participated in various residencies in Chile, Argentina and Spain. For her outstanding work, she has received the following awards and distinctions such as National Fondart (2009, 2010, 2013, 2015); BilbaoArte Foundation scholarship (2015); and CAB Art, Science and Humanities Residence Award (2019); CCU Scholarship Award (2019); Creation award for Finis Terrae University teachers (2016-2018).
+ INFO

Emiliano de la Maza (Chile, 1982). Industrial designer from the University of Chile and educator in sustainability, he has oriented his work towards the field of regenerative design and socio-environmental innovation in urban and rural settings. He is the founder of the NGO PlantaBanda, dedicated to innovation and education methodologies for sustainability at the territorial and community level, and part of the NGO La Reconquista Peatonal, dedicated to valuing daily experiences to connect community and territory. Recently he participated as a guest collaborator in the XIII Biennial of Arts in Havana for the curatorial project Semilleros, a mediation project on educational gardens carried out in a school in Old Havana.
+ INFO

Jasmin Märker (Germany, 1991). Visual Artist with a Bachelor of Fine Arts from the Belfast School of Art, Ireland. Her work is characterized by the cross between bio-art, sculptural installations and performance and the collaboration with non-human organisms to explore holistic approaches to sustainability. Her interdisciplinary investigations combine critical theory, food foraging, urban walks, research papers, interviews, art, and scientific experimentation. The resulting works are often alive, growing and decomposing. Since 2016 she has participated in different residencies exploring themes of art and science and exhibited in Ireland, the United Kingdom, Sweden and Portugal.
+ INFO