Theo Jansen Documentary to be shown in Puerto de Ideas 2018

The irrational optimist, directed by Víctor Leyton and produced together with the Ministry of Cultures, Arts and Heritage, will be premiered on Saturday, November 10th. It combines two visual narratives of his time in Chile for the opening of Wind Algorithms, as well as an exploration on his life and work. 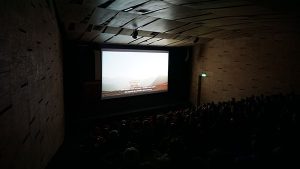 Screening of “The Irrational Optimist” In DUOC, Valparaíso

In an increasingly overwhelming visual world, the Dutch artist Theo Jansen proposes to return to nature, to observe, and learn from it. Made during his visit to Chile to inaugurate the exhibition Algoritmos del viento (Wind Algorithms)—attended by more than 40,000 visitors—this documentary proposes to review his life and work, creative processes and concerns, through a visual journey from the Andean Mountains to the Pacific Coast. Evolution, frustration and imagination have driven this irrational optimist to coexist for the last 27 years with his kinetic sculptures, now world-famous, species of autonomous organisms that follow evolutionary stages and that, according to Jansen himself, have surpassed their creator.

For Madeline Hurtado, President of Fundación Mar Adentro, this documentary truly completes Theo Jansen’s project in Chile: “In addition to the exhibition, we were able to bring the artist himself to Chile. He gave lectures, and most importantly, we jointly designed an educational program for children and young adults. We believe that his work has encouraged and can further encourage hundreds of children and young adults to create independently and to think for themselves about nature. The documentary concludes this year’s work in a concrete and poetic way as it portrays something very important: the free and rigorous spirit of this unique artist.” 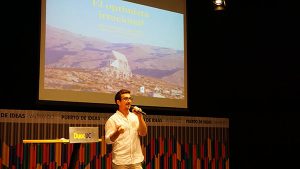 The director, Víctor Leyton, along with his crew, accompanied Theo Jansen throughout his entire stay in Chile documenting his exhibition in National Center of Contemporary Art Cerrillos, his encounters with students, his lecture, as well as his special visit to The Andes and Ritoque beach. “We wanted the viewer to be able to recognize an intimate aspect of Jansen’s mind in each scene and sequence of the documentary. A generous, enthusiastic and irrational thinker who captivates the world through his combination of art and science. His mythical creatures not only bring us closer to the universal concepts of beauty but also connect us with our biological past. This documentary is a visual journey that reveals the enormous strength and relevance of the work of this genius.”

Theo Jansen, Dutch visual artist and physicist internationally known for his kinetic sculptures, Strandbeests (beach animals), built from simple materials that come alive when in contact with the force of the wind. He studied Physics at the Delft University of Technology and in the 70s began to create artistic objects that blur the boundaries between art and science. Some of his most noteworthy projects and exhibitions: Machines and Souls: Digital art and new media, National Museum Reina Sofía Art Center, Madrid (2007); Le Bord des Mondes, Palais de Tokyo, Paris (2015); working sessions with NASA, mission to Venus (2016); Theo Jansen, Okinawa Prefectural Art Museum (2017).

+ Víctor Leyton is a journalist from the Universidad Diego Portales and a bachelor in business from the University of Columbia, New York. He is currently a partner and producer of Mandarina Productions, where he has made numerous documentaries for open television. In the area of ​​visual arts, he has served as a member of the consultative committee of Fundación FAVA and as co-director of Galería Weekend Santiago.

+ Soon the documentary (30 min duration) will be available online at Ondamedia, Chilean cinema platform created by the Ministry of Cultures, Arts and Heritage. 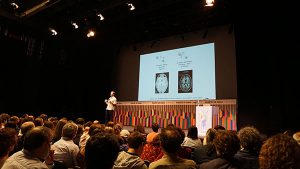 The literature section of the festival will be centered in Latin America, with the presence of writers such as Selva Almada from Argentina, Chilean María José Navia, Cuban narrator Carlos Manuel Álvarez, the Venezuelan chronicler Alberto Barrera Tyszka, and the Argentine poet and translator Jorge Aulicino. In Art and Culture art historian Claudia Campaña will talk about her newest research which deals with the figure of the mythical Michael Jackson and renown landscaper and architect Juan Grimm will share his work with the elements that mark his compositions of nature in space: the sea, the mountain range, pre-Columbian culture, the city,  geology and the native flora. 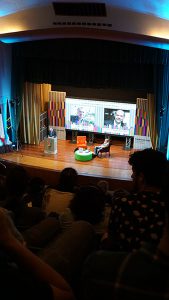 Grand and necessary questions mark this years dialogues and conferences: How much can one regulate language, humor and other practices, without falling into moral vigilance? Is it time to regulate the Internet? Boom or populist crisis? How will capitalism end? What role could Valparaíso play as Apec headquarters in the current debate? What are the challenges of today’s citizens? These questions will be pondered and reviewed by expert in Marx, Wolfgang Streeck, Chilean journalist Pedro Cayuqueo, the psychoanalyst Constanza Michelson, atmospheric chemist Laura Gallardo, Korean K-pop linguist specialist Wonjung Min, Chilean internet pioneer José Miguel Piquer, Peruvian sociologist Kathya Araujo, among other guests.

This year Puerto de Ideas inaugurates a new section Diálogo Porteño, an opportunity to discuss relevant issues for the city and the Valparaíso region. In this first version the speakers will talk about “The meaning of water, the importance of the sea”.

“It is always a pleasure for Valparaíso to receive a new version of the Puerto de Ideas Festival, whose invitation from its origins has been to immerse us in creativity and the birth of ideas from the voice of its multidisciplinary guests,” comments Jorge Sharp, mayor of Valparaíso.

For more information download the App Puerto de Ideas or review the program here.
To purchase tickets: daleticket.cl or directly at the sale booth in the Civic Plaza of Valparaíso. Price: $ 2,000 CLP.

Puerto de Ideas is sponsored by Coopeuch, Fundación Mar Adentro, and the Ministry of Cultures, Arts and Heritage.