We attended the second Chile-California Conservation Exchange (CCCX), a working group that brings together conservation experts from public and private institutions to generate lessons learned and commitments in the conservation of ecosystems.

The great similarity between the coastal landscapes of Chile and California, as well as the tight-knit community created by the organizations 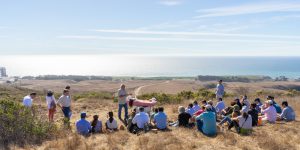 and people who are dedicated and involved in their conservation, inspired the formation of this exchange group that maintains a constant dialogue and common learning exchange over the past two years. The second Chile-California Conservation Exchange (CCCX) meeting was held between October 21th and 25th in Santa Cruz, California, which set out to establish better and more connections and alliances among public policy managers, in addition to strengthening the work of NGOs and philanthropic networks dedicated to coastal protection. About thirty people from each country, representatives of different institutions, participated in talks, panels, on-site visits and workshops. 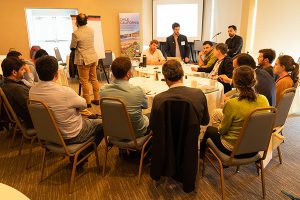 California has more than fifty years of active citizen-driven protection of the coastline, which began in the 70s in response to a series of large real-estate projects and polluting industries. Different actors came together to create the Coastal Commission, a state agency that regulates land uses and public access in coastal areas. Today, it works together with the Costal Conservancy and 76 local governments in urban and agricultural planning and zoning, the use of water from watersheds and the protection of wetlands, public access to all beaches, supervision of construction permits and land use. The Costal Comission works along side the community through open public opinion spaces and bases its actions on scientific research. Recently, their work has focused on preparing the territory for the increase in water levels, since studies indicate that two thirds of the Californian coast will be submerged by 2030. For this, they are receiving advice from Dutch experts and relocating industries and buildings. It was determined that by 2020 there will be no industrial zones on the coastline. All of these issues were presented by experts such as Charles Lester, Sam Schuchat and Rebecca Smyth, among others.

In Chile, however, there are still no institutions such as the Coastal Commission, nor a mandatory legal framework that ensures regulations; nor a philanthropic network—very strong in California—that supports research and protection work. In this sense, today it is urgent to have a Coastal Border Law, whose project was presented by the Minister of National Assets, Felipe Ward. Until now, it is based on a concession system that requires planing and zoning for use one year after the 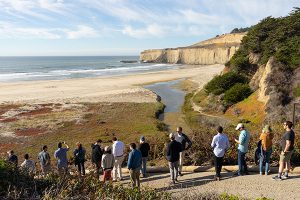 concession has already been granted, which rises many concerns and has been considered as insufficient by Chilean experts. As the work of Fundación Rompientes explained, these concessions without a clear framework can even deny access to the inhabitants of the coastal area. The participants proposed to work with the Ministry to carry out this zoning in a concerted and appropriate way to protect both the environment and local communities. The foundations were laid to create a new network of NGOs and foundations dedicated to protecting the coastline and collaborating in national awareness of environmental threats at sea and the policies that accompany them. 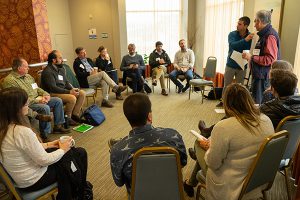