Pehuén Sound Series: Archiving the Sounds of a Temperate Forest

At 19:30 on August 9th, the Pehuén sound series (Ciclo Sonoro Pehuén) concert directed by sound artist and composer Fernando Matus de la Parra will take place in the Centro Cultural Liquén de Villarrica, along with an audiovisual installation containing a video piece created during his residency in Bosque Pehuén with the collaboration of two musicians. 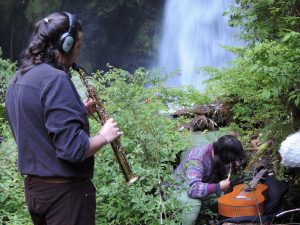 Pehuén sound series, organized by Fundación Mar Adentro, is a sound-experience and installation project that seeks to portray Matus de la Parra’s creative process, recollected sound recordings and on-site musical performances created during his participation in our residency program Bosque Pehuén – Resonancias (Resonances) version, which took place in november 2021. Through his research into the sounds of the forest, he developed a musical score for ecosystems, created by means of active listening exercises in a section of the forest where he habitually listened to three species of birds (chucao, White-crested elaenia, and thorn-tailed rayadito), each of which he assigned a traditional musical instrument. Furthermore, he composed another score to respond to the sounds of the forest and to generate a conversation with its inhabitants.

Fernando Matus de la Parra’s work tunes into an environment’s environmental conditions and characteristics to create musical compositions. The pieces seek to interpret biodiversity through musical interpretations, incorporating other elements like wind pressure, movements generated by plants, the rhythms of bird flights, and the floating of clouds or bodies of water, among others. These recordings invite listeners to experience these environmental sounds having in mind their biodiversity value. 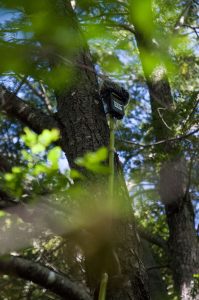 “The auditory richness and qualities have a direct relationship with biodiversity; they hint at an abundance of species in a particular area, the preservation of their environments and the existing ecological balance. An alteration in this balance immediately affects the sounds of each ecosystem. The musical register of these environments, from an artistic point of view, is becoming more urgent in the context of the climate crisis, and the pressing extinction of ecosystems and species,” says Matus de la Parra.

Pehuén sound series is the result of the residency program Resonances, organized by the Goethe-Institut of Chile and the French Institute of Chile, with support from the French-German Cultural Fund, the Ministry of Culture, Art, and Chilean Heritage, in association with the following residency spaces ISLA / SACO, NAVE, Casa Espacio Buenos Aires 824 – FIFV, B.A.S.E / Tsonami Arte Sonoro, Bosque Pehuén / Fundación Mar Adentro and the University of Magallanes.

Fernando Matus de la Parra Torres (1986). Composer, sound artists, educator, and sound designer, currently residing and working from Villarrica, Araucanía region, Chile. He holds a Masters degree in fine arts and musical composition from the Pontificia Universidad Católica de Chile. In addition, has worked in musical composition studies alongside the masters Aliocha Solovera, Antonio Carvallo and Cristián Morales. He currently works as musical director and composer of various projects dealing with sound interventions in public spaces that bring together contemporary musical composition with auditory landscapes and acoustic environments. In addition, he works as a musical composer in the theater-auditory company Persona, among other performing arts projects.