Voices of a Woven World: Poetics and Inner Sustainability 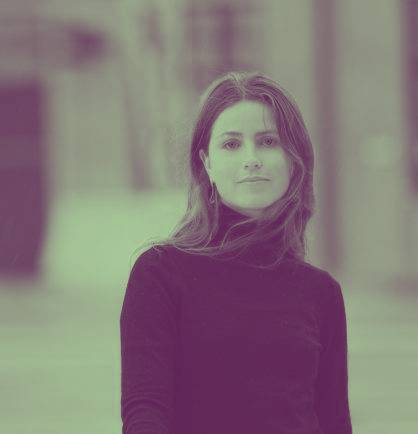 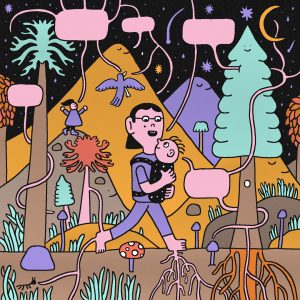 Our feet trace a path of twisted roots and earth adorned with pine needles alongside the frozen body of Suur-Kaksjärv, a lake enveloped by pine trees. I catch the glowing face of a four-month-old held against his mother’s chest as they trek ahead. His eyes are open wide, directed slightly upward towards the tall treetops that compose, to his perception, a world set in motion by his mother’s walking. At his age, this world is gradually coming into focus. The brown of the pine bark sharpens, the shapes of trunks emerge, and waves of sound weaving human and non-human ebb and flood, yet without meaning. Then, he sounds forth a voice of his own, a voice among voices.

“Human beings travel through life in a world invested with gestures,” writes Mapuche poet Elicura Chihuailaf, “little by little, with the growth of experience, meeting the words of the others, the colors, the aromas, the textures, the impressions we are given by these things and by the mysteries of our dreams, the said murmur transforms into a language” (Chihuailaf, 1992, cited by Cooke, 2013). In his view, words are the world’s gestures. Language, in turn, emerges from an engagement with these non-linguistic phenomena. I think of a young child to whom there is yet no clear distinction between the rustling of leaves and his father’s whisper, both initiating him into a gesturing world of which he is a part and into which he will contribute. What kind of a conception of a poet and of poetry does a system of thought such as the Mapuche, the peoples native to Southern Chile, give rise to?

When devising a research proposal for the Bosque Pehuén Residency Program, to be conducted remotely from my current place of residence in Estonia, I asked whether primeval forest ecosystems offer a particular worldview, expressed in the psyche and language of the people who have lived in relationship to it over time. Thus, by listening to the psyche, would something from the land come through as well? As forests have played an integral role in the identity of my own ancestors and the culture into which I was born, even as this has been largely forgotten, I have wondered about the usefulness of the distinction between culture and nature, as many from within the Western paradigm have questioned. In the context of the residency and this brief five-week inquiry into poetics, I was drawn to tracing how emotions, thoughts and intuitions, the subtle realm of inner sustainability, are experienced, expressed and attended to through such poetics.

The Mapuche cosmovision, as I learned through readings and by speaking with Alejandra Cariman, a specialist in intercultural education, and Gloria Hortensia Mercado, a teacher of the Mapuzugun language, puts forth a universe made up of correspondences between elements. The human being is nothing but “a point of great dialogue” of energies, which travel between elements (Zurita, 1989, cited by Cooke, 2013). And “as in aboriginal thought”, writes Stuart Cook, a scholar researching poetry from both Southern Chile and Aboriginal culture of Australia, “in no sense are the categories of body, world and language separate or meaningfully discrete” (2013).

Leonel Lienlaf, a Mapuche poet whose work weds the structure of traditional song-poetry, the oral tradition of ül, with a contemporary written form, considers himself an expression of his culture rather than a representative of it. Ül, created through spontaneity and improvisation by a single voice, is nevertheless considered communal inheritance of the Mapuche, rather than private property of the poet, Hugo Carrasco Muñoz explains. The ülkantufe “sees the performance of ül as the re-articulation of a tradition (…) the task of the ülkantufe, then, is to grant the song-poem the best qualities of his voice” (1992, cited in Cooke, 2013). Furthermore, the unique voice of a poet like Lienlaf is at the same time considered a becoming of an ancestral assemblage. An amalgam of the voices, as described by Chihuailaf, which have made his language possible. This perspective echoes that of other native writers who, despite the particularity of their cultures, emphasize that behind each writer is a world of human and non-human relations from which the work is born.

Oral poetic traditions such as the ül and that of regilaul, the folk song of Estonians, are crafted in the moment of utterance and thus have a fleetingness, an emergence and retreat, built into them. They rise, nourishing, grieving or celebrating, and return to the invisible realm, out of which they may rise again. This is a poetry that is able to hold different kinds of time, as described by Joy Harjo, current U.S. Poet Laureate and a member of the Muscogee (Creek) Nation. As a speech act, it reinforces a given ancestral community and realizes the voice of the contemporary poet, yet also activates the agency of evoking change and creating a future through the power of words.

Estonian biologist and folklorist Mikk Sarv (2018) and eco critics such as William Rueckert have pointed to the living quality of poetry, the latter referring to poems as “part of the energy pathways which sustain life” (1978). Cooke, who argues that the poetry of Lienlaf may set an example for an ecologically sensitive poetics, reflects that “by providing the poet with a language, the earth might then enjoy the benefits of renewal and reaffirmation provided by the poem” (Cooke, 2013). These perspectives invite us to pay attention to the subtle energies of thought, emotion and intuition, which, despite their apparent intangibility, perform an integral role in the health of the ecosystem of which they are a part.

The current paradigm shift in the Western world towards a regenerative sustainability, which holds humans and the rest of life as one autopoietic system, is turning its eye inward. There is a growing awareness that addressing inner realms—i.e., inner sustainability—is essential for any kind of lasting change in the outer realms—i.e., outer sustainability. “Inner sustainability refers to aspects of existence that are unobservable—worldviews, paradigms and the ability to transcend them, beliefs, values, thoughts, emotions, desires, identities, and spirituality. Outer sustainability includes the observable aspects of existence that arise from inner aspects—policies, governance structures, economic markets, the built environment, and ecosystems (i.e., coupled human–environment systems)” (Gibbons, 2020). Appreciation for the seemingly subtle, inner and hidden fields of existence has been and is central to many indigenous cultures and practices, with the ül as an example. As in the work of Lienlaf, these personal and ancestral experiences of grief and sadness over territorial dispossession, as well as reverence, find release, thus preserving and honoring the history and the future of its people.

The Estonian author Mikk Sarv has said that forests are places that can hear and that listen attentively to our being and thoughts. As the voice of my four-month-old friend echoes through the air amongst the pine trees, I imagine the voices that have made his possible and those that his voice will enable. At that moment the air is listening, the pine bark is listening, even the ice is listening.

Hanna Laura Kaljo. Researcher, curator and writer born in Estonia, drawn to questions at the threshold of the internal and external world. She has been working through interdisciplinary curatorial projects with a research-led approach. Writing in both her native Estonian and English, she has explored the living presence of places, phenomena and inner worlds, as in Of Tongues in Shaded Streams (2020). Recent curatorial projects, such as Let the field of your attention… soften and spread out (Tallinn, 2019), have taken the form of contemplative spaces, in dialogue with seasonal cycles and elemental movements. She holds a MFA in Curating (2015) from Goldsmiths College, London, where her inquiry was in conversation with the field of environmental humanities. Her approach is further informed by training in Dance- and Movement Psychotherapy.

The illustration of this column has been created by Pablo Delcielo.