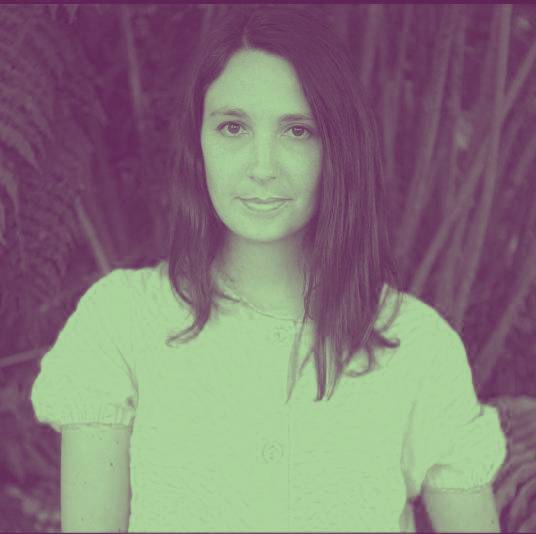 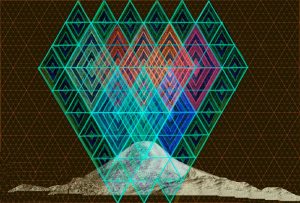 Always interested in the cycles of nature, Elisa Balmaceda began working with the sun and later expanded her research to include subjects linked to ecology, the understanding of time and space, and its connection to a greater cosmic order. Likewise, she has explored how to resignify ancestral knowledge and techniques for observing and organizing the world as living knowledge that resonates with the land and bodies that inhabit it. She is an artist that seeks to highlight the role of the invisible in reality; of those energies that, in some way, mediate and build what we perceive, without our noticing it: building bridges between human and non-human sources.

Fundación Mar Adentro: When did you become interested in exploring topics related to nature and its relationship with light and cycles, as well as astronomical phenomena?
Elisa Balmaceda: My father was an astronomy enthusiast, and as a child I would observe astronomical phenomena together with him. I then moved to Germany, where the seasons, as well as light and darkness, is much more radical; it really affects you and you can feel it in your body. On the other hand, I’ve always been an observer and I grew up in a rural area surrounded by trees and hills…The topic of the cyclical and circular is something that began appearing in my work from its connection with the sun as materiality, and which currently has expanded to aspects related to ecology and the understanding of time/space, its representation and its association to a greater cosmic order.

How do you associate and work on the existing tension between ancestral knowledge and science and technology?
The problem with western science and technology is that there is a hegemony of knowledge that has tried to universalize the understanding (and technique) of the world; when in reality, the land and its cultures are diverse and cannot be unified. Globalization and the modern project (together with colonization) have progressively erased certain connections that refer to the origin and particularity (material and symbolic) of the environment we inhabit. As stated by Yuk Hui –a philosopher whom I am currently reading–, claiming technical and scientific diversity is a necessary exercise to redefine the relationship between the human and the non-human in the midst of this planetary crisis. In Hui’s words, “there is no one single technology, but rather multiple cosmotechniques”. Following this same idea, my most recent projects have explored how to resignify certain ancestral knowledge and techniques to observe and organize the world, understanding them as living knowledge that still resonates with the land and the people who inhabit it, and not in a nostalgic or romantic manner. I’m interested in exploring how these technologies and ways of organizing time-space converse, collide and interweave with contemporary technologies and the present time–which in turn means assuming my place of origin, which is itself contradictory, mestizo and conflicted–.

What are some of the invisible aspects in nature that you would like to reveal in your work?
I am obsessed with some invisible “fields” such as energy, electricity, light, magnetism and electromagnetic waves. I believe that the invisible is as much a part of reality as the visible; it’s all one landscape that is material but which we cannot see. Juan Downey called these forces and fields “invisible architecture”, which somehow mediate and build what we perceive without our realizing it, relating and connecting things and building bridges between human and non-human sources. I recently read about the notion of the ecosystem within the Mapuche worldview, in which energies and the invisible are considered as much a part of ecosystems as everything visible, and this also includes the spiritual and the relational. I am relieved about this much more interwoven, complex and comprehensive view of the world; it seems much more real to me. Lately I’ve also been studying the sensibility of the non-human: trees, for example, are sensitive antennas and manifest their behavior towards electromagnetic fields created by humans; lichens are sort of sensors or bioindicators that demonstrate a certain purity of the air in places where they are present. I believe that connecting with other sensibilities and decoding non-human “sensors” can help us communicate and dialogue with other species, as well as with those invisible forces that are present and affect us and our surroundings. Experiencing a total eclipse during your residency was very consistent with the work you have been doing.

What did this experience mean to you?
It was a very emotional and overwhelming experience. It’s difficult to translate into words. Experiencing the umbra (the moment of total darkness that lasted two minutes) is very impressive; it makes you feel how tiny we are and the immensity of the cosmos. The inrush of darkness in the middle of the day while immersed in a forest, made it even more evident that every living being is regulated by the cyclicality of day and night. I was at the feet of the mother araucarias (some of them over 500 years old) and thought a lot about those other timescales, about the geometries that a planetary alignment like this entails, and the ancestry of all the entities of that land. Somehow, I think I also felt the pandemic year emptying into that darkness (which, paradoxically, happens because of a virus that takes its name from the sun’s “crown”, which can be seen during these types of eclipses). Another figure that I had in my thoughts at that moment was the puma. I was both afraid and fascinated by the possibility that one might appear, disoriented not by the pandemic but by the sudden darkening of the sun.

What were your greatest learnings during the Residency at Bosque Pehuén?
One thing I could highlight and which left a mark on me was the importance of the cycles of life and death in the forest, for the regeneration and maintenance of its life. I also thought of the presence and importance of the water that freely travels through the basin and the forest, acting as a protector to them. I thought of the importance of perceiving the interconnection of the sun, the trees, the water and the volcanoes; understanding the trees as alchemical connectors and mediators of the spatial and material dimensions of the landscape and the elements (air, earth, water); and of admiring the mother araucarias over the basin, like ancestral guardians of the land that materially and symbolically resist fire and the current environmental degradation. In short, I think this opportunity made me even more aware of the importance of the sensory and material experience of a place like this; to connect from one’s body to the non-human and its timescales, its sounds, materials, colors, smells, rhythms, cycles, and more.

Were you able to experiment with new materialities? I understand that you worked with the trap cameras we currently have in Bosque Pehuén, how was that process? The trap cameras were something that popped up during the exploration of the forest. I thought they were very interesting precisely because they register the “hidden” life (non-human) of the forest, in a passive and non-invasive manner. On the other hand, they can film at night, which is even more hidden, using night-vision technology (infrared light)–something that many animals actually have incorporated into their visible spectrum, which allows them to see in the darkness. So in a way, looking through those cameras also brings you closer to that non-human vision (even if it is just a technical approximation). I used them to register the moment of the eclipse in the forest, which I went through to install the cameras in 8 different spots during various days. Apart from the cameras and the eclipse, I also explored a volcanic vein which contains fragments of obsidian, a black rock (actually glass) that was used as one of the first mirrors in Mesoamerica. It was also later popularized by alchemists in Europe, to which various spiritual uses were attributed and which is also linked to some observation rituals of the sun, as the obsidian can be used both as a reflector and to look through it.

You worked very closely with co-resident Nicolás Aracena (architect and carpenter) during the residency. How did this collaboration take shape and what was the result?
We arrived at the residency at the same time and spent the first week exploring the place together, walking through the forest for our field work. The process allowed us to exchange certain views on the presence of water, and after touring the highest part of the basin in Bosque Pehuén we thought of creating an exercise together: a sort of ephemeral intervention where we wanted to divert a drop of water in a ravine which emerges from the vein and goes down to the basin. To do this, we used some “pipes” made from colihues (similar to the bamboo) that Nicolás worked on, so that the water would slide down the rods and follow their course until falling on a black volcanic obsidian rock found at the place, where it created a small light, reflecting pool and then returned to its course in the earth. A small and humble tribute to this fountain which flows and gives life to this entire place.

You will be launching your first publication soon. What’s it about?
It’s a “monograph” or publication that brings together various individual and collective projects that I’ve been making as a visual artist since 2013. It’s actually the first book or compilation that I’ve made about my work, so I’m very happy to soon have something published on print which can expand the lives of these projects, especially for the ephemeral pieces that I’ve worked on, as well as projects that I haven’t been able to show.
__
Elisa Balmaceda. Visual artist, audiovisual producer, teacher and researcher. Her work is framed in a transdisciplinary practice that investigates the link between the human and the non-human through a material exploration of landscape, technology, time-space, the cyclical, ecology and environmental degradation. She has participated in various cultural exhibitions and projects in Chile, Argentina, Colombia, Spain, Germany, Belgium, Serbia and the United States. She currently teaches at the Universidad de Concepción and collaborates with various institutions, artists and cultural media in workshops, creative projects and publications, among others.

The drawing included in this interview was made by Elisa Balmaceda.