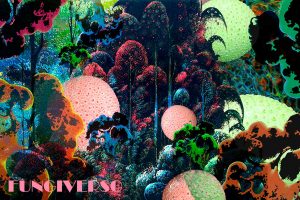 A broad rereading of the work confirmed the theory. In all fictional works, each time a man is confronted with several alternatives, he chooses one and eliminates the others; in the fiction of Ts’ui Pên, he chooses— simultaneously—all of them. He creates, in this way, diverse futures, diverse times which themselves also proliferate and fork. Here, then, is the explanation of the novel’s contradictions.
J L Borges, The Garden of Forking Paths

FUNGIVERSE [1] is a conceptual proposal that speculates about the future relationship between biotechnology in different cultural contexts through its correlation between constructive methods and ways of human inhabitation. The plot will be described by a mysterious visitor through postcards, and developed across five scenarios that occur and diverge simultaneously.

Note: Check the postcards in the image gallery at the end of the text in English and Spanish version 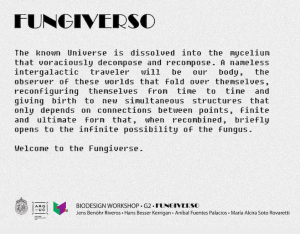 Synthetic biology involves the creation and re-design of living systems–or their components–through the programming of coherent and functional DNA sequences (syntheticbiology.org). Currently, the old transfer of just a couple of genes has been overtaken by the production of a fully synthetic genome (Gibson et al., 2010). The regulatory pathways of organisms are modified by inserting artificial sequences of genes in order to provide new functions to cells and the entire organism. In this fashion, scientist have tried to define a “minimal genome” by experimenting with some bacteria characterized by small genomes (e.g. Mycoplasma mycoides), reducing the amount of nitrogenous bases until the organism can no longer survive: the size and structure of the genome at that moment will be the limit–always hypothetical–which helps define and understand the smallest possible genetic structure that can sustain vital processes. This minimal structure would be the fundamental support for life, and therefore useful for the development of DNA biocircuits.

However, from synthetic biology arises a series of ethical issues: the possibility of a human being of manipulating or creating life, the impact of these actions on societal and ecosystems, or the power relations that silently determine the decisions that lead laboratories and large corporations with regards to this technology. In this context, we declare ourselves both apocalyptic and integrated (cf. Eco, 1964/1984); apocalyptic because we believe in the imminent and immanent impact that synthetic biology, specially biodesign, will have on our daily life, and integrated because we decided not to ignore its use but to reflect on the different questions that can shed light on the future of a technology whose democratization is not guaranteed. 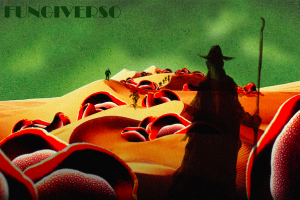 As a result of interdisciplinary collaborations, synthetic biology and design have converged in biodesign; a discipline where laboratory organisms are used as raw material for the study, experimentation and production of new materials from living beings (Rodrigo & Jaramillo, 2013). Biodesign in this context includes not only genetic programming but also the general manipulation of organisms, be they bacteria, fungi or other living organisms, in order to generate objects and products.

Design and its inexhaustible desire for control of matter and form, is translated into the field of architecture and construction in the need to develop discrete materials such as bricks, wooden slats, glass panels, steel beams, etc. In short, the blocks with which we conceive our buildings and objects. This phenomenon has been reiterative in the evolution of different constructive traditions and appears again in biodesign, rethinking fungi and bacteria as building materials. The ways in which these biomaterials appear in the market show how a new technology is homologated to the existing constructive traditions. [2]

When using fungi as biomaterial they, as if they were clay, are put into moldings and once they have filled the desired volume, it is necessary to kill them in kilns at high temperatures to stop their growth (http://www.ecovativedesign.com/how-it-works). The design of this constructive process reveals at least two things: on the one hand, the rapid appropriation of this technology by the cultural industry (Cf. Adorno, T. & Horkheimer, M., 1944/1988), that is to say, that its adoption has a priori emptied the possibility of generating questions about the various aspects of the technique–from the formal to the epistemological–, in order to achieve a recipe that can be easily consumed by the market; and on the other hand, the evident impulse of the industry towards the control over this matter, rooted in the systems of standardization and certification to which a new material must be subdue before its release into the market. However, the origin of this constructive universe is unknown, as it was not created nor conceived by humans, but by living systems whose formal and temporal logics are characteristic of autonomous growth and interdependence with the environment. First and foremost, we should be talking here about emerging systems, about metabolism and carbon and nitrogen cycles, about colonization of substrates and symbiosis, rather than of formwork and molding. In other words, our proposal aims at contemplating the inherent possibilities of the matter with which we will work, before truncating them in order to make it familiar.

There is no doubt that it is possible to generate a technique that manages to pair biology with architecture, connecting for the first time two constructive universes that were foreign to each other, but it is impossible to predict what is going to happen with this technology in the future. This link generated by synthetic biology is only the trigger for what could eventually be real estate speculation based on mycelial metabolic rates, or bio-programmed obsolescence of design, etc. It is therefore not feasible to have a univocal interpretation of biosynthesis. The notion of the present requires the schizophrenia of the future. 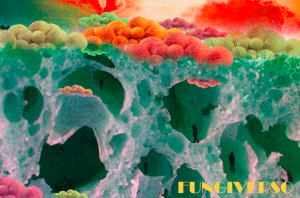 Science fiction is a kind of alchemy with its own hidden rules, which transmutes our deepest yearnings into different worlds and delusions. That is why we believe it is the appropriate tool to, from the future, speculate on the present. The images we make, the stories we tell, bring us closer to the margins of our time. So, through science fiction we raise a series of questions to the cosmos, but we do not expect its answers; avid with curiosity we set out to sketch our own answers, which bisect our known universe in various dimensions. Since these paths are developed simultaneously, the present exercise tries to explore some of them as parallel, discrete and coherent worlds, focusing the discussion on the different possibilities of control of the biosynthetic technique, and therefore control of biological processes. This task unveils the true search: the constant attempt to control ourselves and our world. And yet, we always find a limit, invisible laws proclaimed by the tangible fall of an object, or the transcription of a gene associated with metabolic enzymes. These unwritten laws go through us and determine us, but to what extent, we do not know.

For this reason we chose to ask biosynthesis questions about its relevance and scope. The exploration of any technology first requires a process of questioning how to think about it, especially when it relates to living organisms. Given the imminent development of this technology we ask ourselves: What will the relationship between design and biology be? What will the relationship between this discipline and the development of the human species be? How will biodesign transform our environment and ourselves? To what extent will these new technologies redefine human modes of production?

We foresee some of these explorations translated into laboratory tests, prototypes and constructive systems, but for now, we speculate.
_________________
[1] Text made from the work developed in the first Biodesign Workshop of the Pontificia Universidad Católica, organized by Alejandro Soffia and Fernán Federici in May 2016.

[2] Examples of this gap between the development of a constructive technique and its form are many: from the incorporation of elements of wood construction in classical Greek stone architecture, to concrete construction of neoclassical details in Chile during XX century. For the latter case, see Torrent, H. (1995). Bellas Artes, Técnica y Arquitectura en Sudamérica: La Biblioteca Nacional en la modernización de Santiago de Chile. ARQ, (29), 2 – 5. 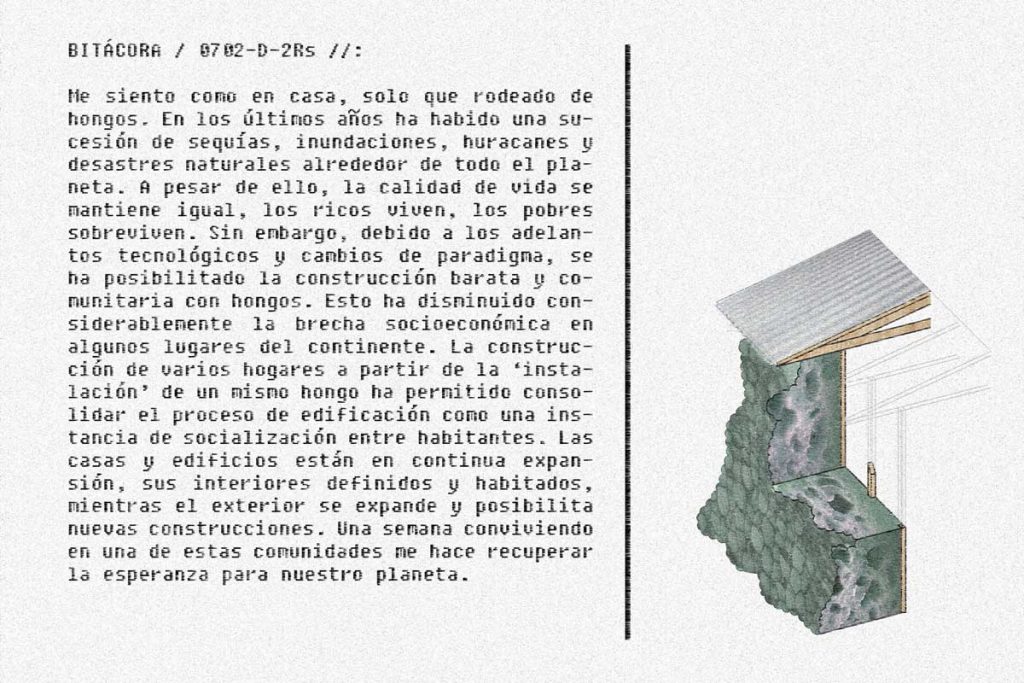 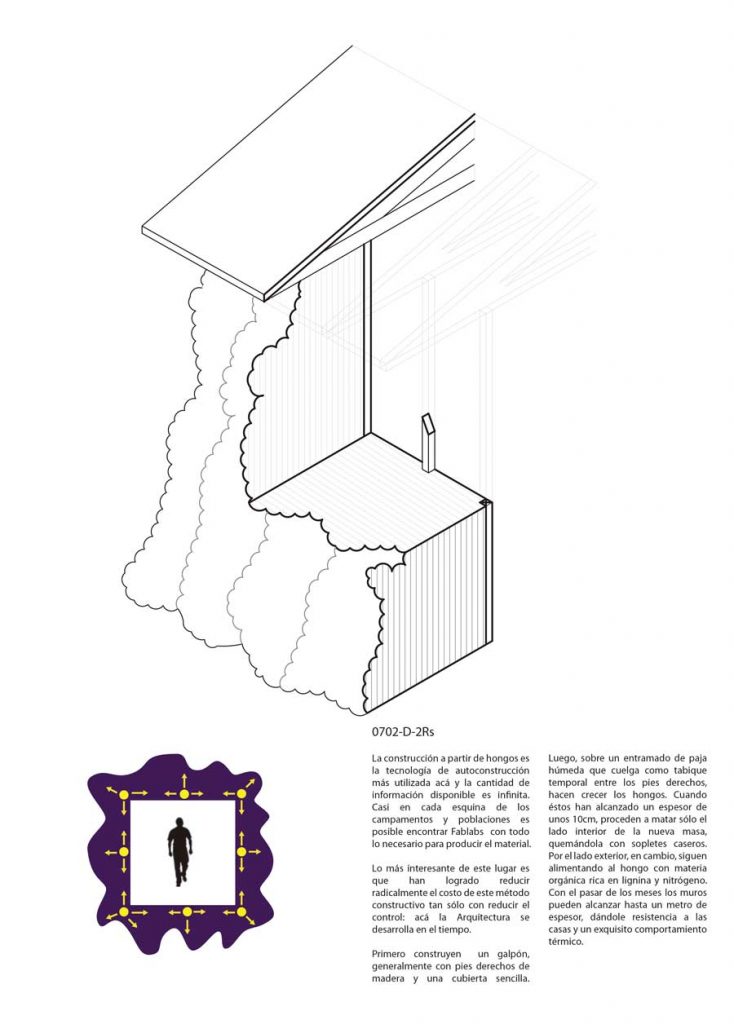 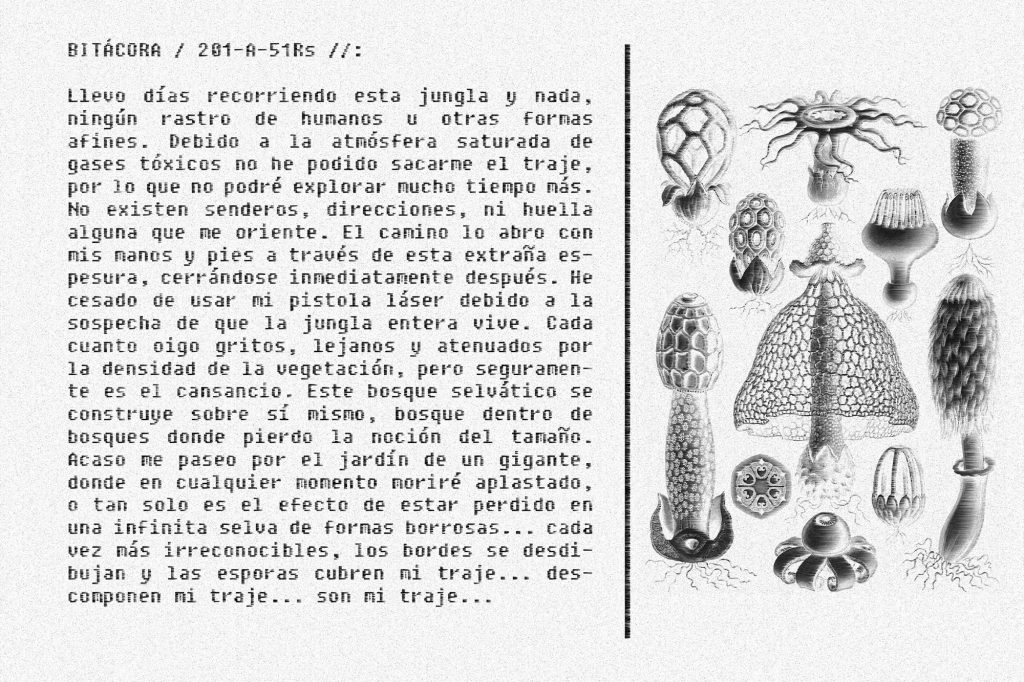 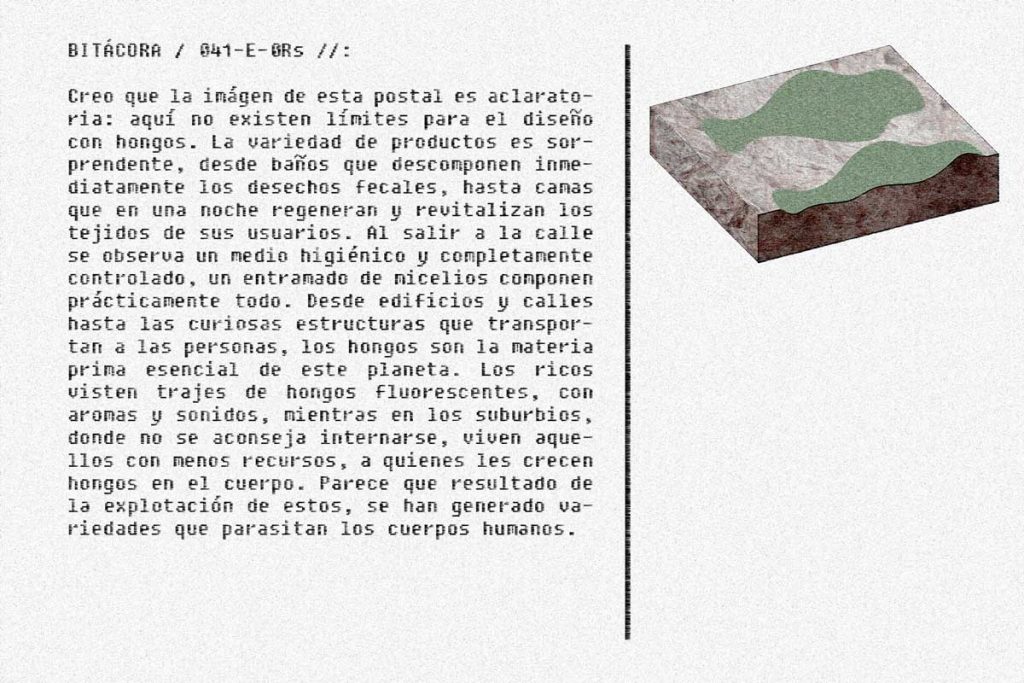 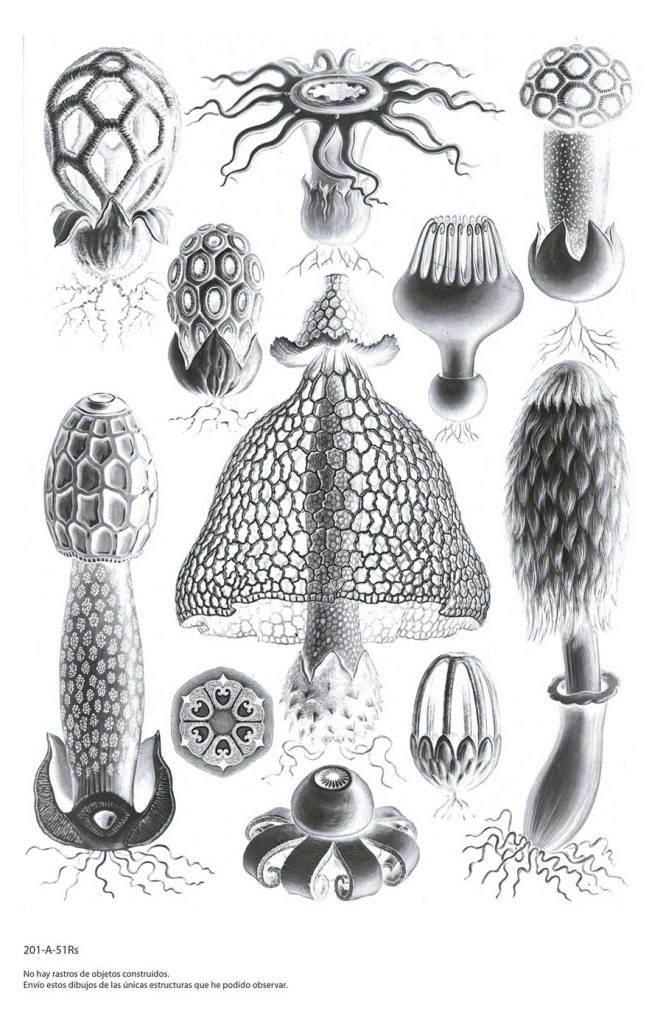 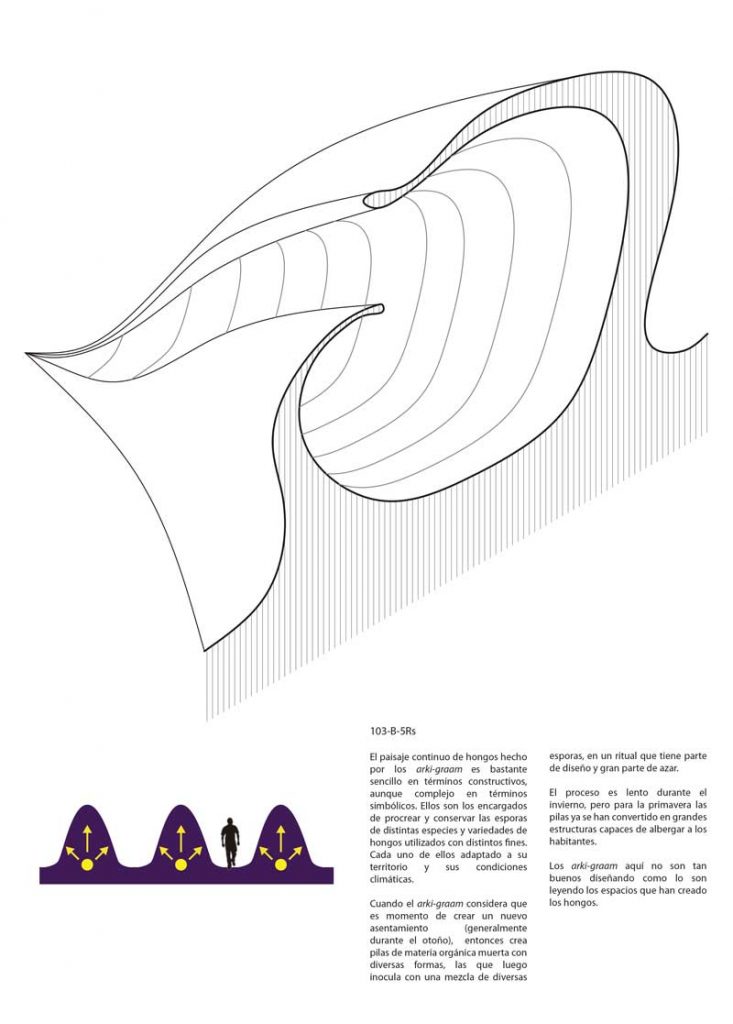 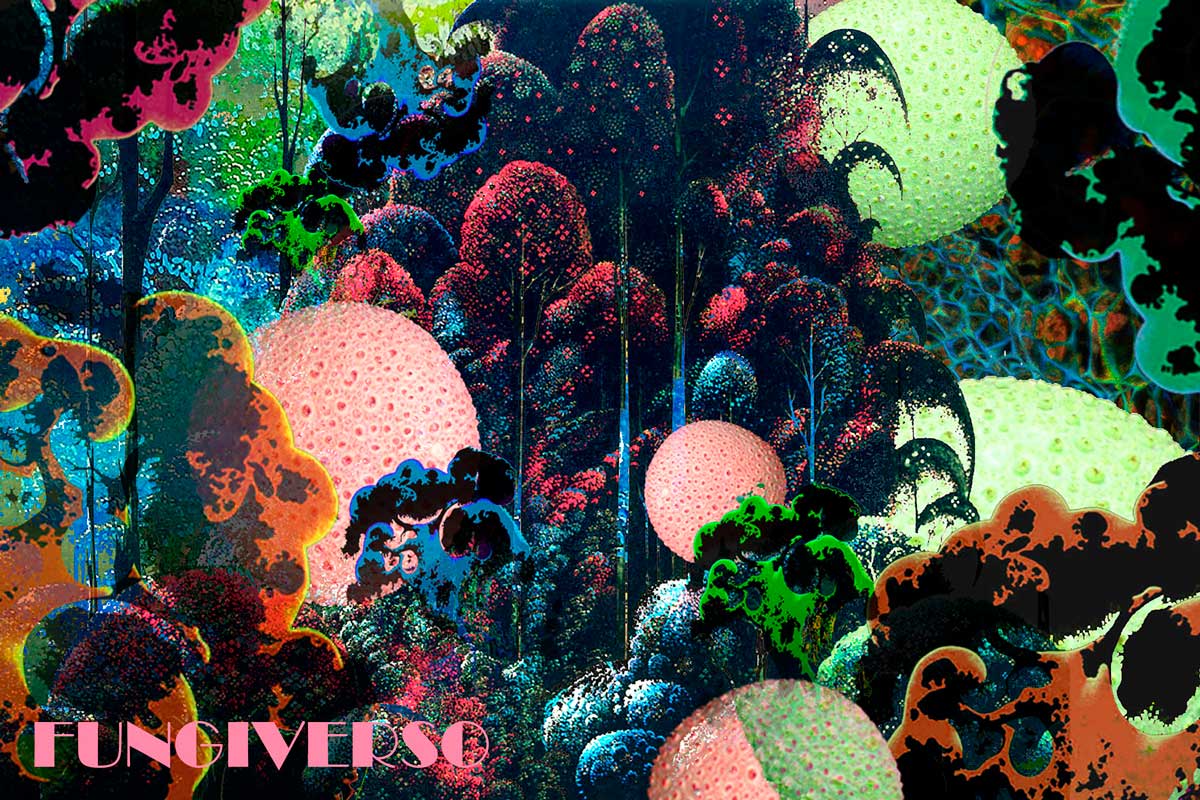