The artistic process as a game

by: Cristóbal León, artist and filmmaker 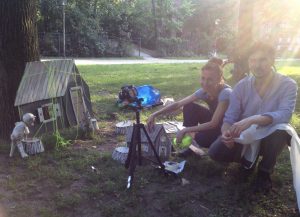 Interview with Cristóbal León, artist and filmmaker.
Co-Director of the award-winning film La Casa Lobo (The Wolf House), together with Joaquín Cociña, Cristóbal speaks in this interview about the role of art in the climate emergency, the upcoming premiere of his short film “Los Huesos” (The Bones) at the Venice International Film Festival, the idea of games at the center of creation, the projects he is working on, and an unusual anecdote that links the origins of stop-motion to the natural world.

Fundación Mar Adentro: A few weeks ago we launched the short film Extrañas criaturas (Strange creatures) created by Cristina Sitja Rubio and yourself, which received a great response from the public. How was this audiovisual work developed and what were its main challenges?
Cristóbal León: The main challenge for me was making something that was enjoyable and understandable to a child. I’m not used to thinking of a viewer that is so different from myself. We tried to do this without compromising our own enjoyment of the artistic process, and I hope we achieved it. Now that I think about it, the process had something quite childish about it too. During the shoot we were like kids on all fours playing with paper bears and rabbits in my parent’s garden or in parks in Berlin. Then came the part of coloring all the images by hand, using colored pencils and highlighters. We created our own kindergarten for ourselves.

How would you generally describe your creative process?
I’d love to have a consistent methodology, but I’m afraid I always approach projects in different ways. I envy artists that find a methodology they like and can repeat forever. My collaborators and I chose to complicate our lives, for some reason, and experiment with new ways of doing things for each project. One thing I do try to maintain is an emphasis on the process over the final result. You have to enjoy the journey. I don’t like to become a slave to previously made decisions. This means keeping the process open and defending absolute creative freedom from beginning to end. It’s more fun this way, without the work having been in my mind before it existed.

You are now making another short film with Cristina –No soy tuyo (I am not yours). What stage are you at? Can you tell us a bit about what it entails?
A couple of years ago, a friend picked up a dying baby bird on the street and took it to her apartment to take care of it. The bird was really battered but my friend was able to save it and, according to her, taught it how to fly. The strange thing is that when it was able to fly, the bird would leave through the window but came back to the apartment at night. During various weeks it came and went, and my friend’s life revolved around the bird. Until one day, as was expected, the bird didn’t come back and my friend became terribly sad. Cristina had just mentioned to me that she was looking for a story to illustrate, so it occurred to me to take the main elements of this anecdote and turn it into a story. I don’t remember if it was my idea or Cristina’s to make Cuchuplum the protagonist, who is, for Cristina what Mickey Mouse is for Disney; that is, the main character of its universe. In short, Cristina illustrated the story that I wrote and it’s now being transformed into a beautiful and strange animated short film. The animation is almost finished, there are only some details left before it goes into post-production, sound design and musicalized, which will once again be done by Diego Lorenzini.

Both Extrañas criaturas (Strange creatures) and No soy tuyo (I am not yours) deal with issues related to the environment. What do you think the role of art should be, in relation to the environmental emergency we are living through?
I think that art digests reality and returns a distorted vision of it. At least the art I like is like a dream that transforms reality, anticipates it, resignifies it, organizes it, or turns it into a nightmare. I think the emergency is a radical one, so the paradigm shifts must also be radical, and art can spontaneously speak of this in its weird ways.

The Venice International Film Festival begins on Wednesday, September 1st, where together with Joaquín Cociña will premiere the short film Los Huesos (The Bones). What can you tell us about it?
Los Huesos is a short film that was born in the heat of the social outbreak in Chile. We imagined it as a ritual-film made at the beginning of the 20th century, with the objective of freeing Chile from feudal order. We were very inspired by the animated films of Ladislas Starevich, who could be said to be the father of stop-motion. Starevich said that he began making animated films when, while he worked as the director of a natural history museum, decided to film the life of cockroaches, which would scurry away or hide, or even die when exposed to the powerful spotlights used at the time. He then decided to take the cockroach corpses, replacing their legs with wires, and animate them frame by frame. It’s a beautiful myth of the origin of this technique which imbues stop-motion with a touch of black magic. In the case of Los Huesos, the cockroach corpses are replaced by sculptural creations that resemble human corpses. We are very happy with the film.

Regarding your creative collaboration with Joaquín, which has been ongoing for 14 years now, has there been an evolution in the way that you work together? What do you think has changed?
There has definitely been an evolution. I would say that there is increasing confidence in each other’s work. In short, I think we are less and less controlling of each other’s work. It has been a natural and gradual change that has to do with understanding the artistic process as a game. If we agree on the rules of the game, we can each move forward freely without having to consult each other for every little decision. This is in regards to collaboration. As for the work itself, we try to maintain the same spirit of playing and experimentation that we had at the beginning. We try to get in trouble and have fun in the process. Now, though, with a little more resources and a lot less time.

Cristóbal León.
Visual artist, filmmaker, animator and designer. Studied Design and Art at the Pontificia Universidad Católica de Chile. Later on, he studied art at UDK-Berlin and was a participant in the De Ateliers residency / postgraduate course in Amsterdam. Much of his artistic and cinematographic work has been done together with Joaquín Cociña, with whom he launched the León & Cociña duo. In 2018 they released their first feature film, the animated film La Casa Lobo. 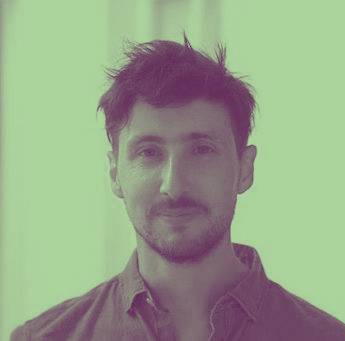