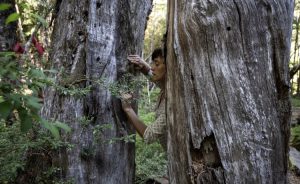 Fundación Mar Adentro: How does Agencia Borde come about and its interest in investigating the limits of the notions of landscape, territory and its inhabitants?
Agencia Borde (Sebastián Melo, Rosario Montero and Paula Salas): We are an art research project that explores the limits of the landscape in relation to the territory and its inhabitants. We began to work together in 2012, when the three of us lived abroad, in Holland and England. Our experiences as immigrants led us to look at borders, migration offices and ID cards with other eyes. We began to explore the themes of cultural identity, territories and representation; our first pieces arose from this experience.
Currently, our main objective is to conduct research from an interdisciplinary perspective on the ways in which people and places determine each other. We are interested in the power structures that sustain contemporary notions of landscape. For this, we use art as a means of study, and anthropology as a method; finding, studying and producing visual, audiovisual and written material. We work collaboratively, cooperating with various people according to the characteristics of each project.

What do you understand by landscape and how do you conceive it from a postcolonial and transdisciplinary perspective?
The notion of landscape is in itself complex, often even contradictory. It has different meanings which are often anchored to the areas of knowledge from which they are spoken about. Maybe that’s why we like it so much–it is somehow shifty, movable. It links the human with the non-human, and the territory with those who inhabit it, without emphasizing the nodes but rather the relationships they sustain.
This way, from a postcolonial perspective, the same notion of landscape is a contradiction, because it seeks to understand the idea of inhabiting from the hierarchy of those with a Cartesian point of view. That is why we find it interesting to decenter from the pictorial tradition (crossing those transdisciplinary borders) and think of it as a landscape that crosses over, that affects us at the same time that we affect it. Not as a passive recipient but as an agent of infinite relationships.

How does the perception of the landscape change once the pandemic begins?
It’s difficult to know exactly what changes; we are still living through it and experiencing those changes, which makes it hard to have a critical view. Maybe there was a change in the landscapes and how they affect us. Some became clinical, mediated by screens; others are contaminated by memory, what is known and what is experienced (or what couldn’t be experienced).

What does the Bosques de fuego (Forests of Fire) project consist of and how do you address the various interpretations of the forest?
Our experimentations arise from a question: what role does technology play in the mediation of our experience of the landscape? In Boques de fuego, the landscape in question, for the first phase, are the eucalyptus plantations. We began to think of the species and its history, representation and cultural construct in Chile. The interest lies in taking the eucalyptus as a case study to question and understand the daily tensions that arise between the categories of nature and culture. Then, based on the monoculture, we ask ourselves about its symbolic and biological opposite: the forest. We set out to explore how trees can transform into a forest ecosystem. Bosques de fuego is therefore articulated as a polyphony of voices building different interpretations of the forest and its antipode, the plantation.
We plan on doing two exhibitions; the first at the gallery in the Universidad Católica in Temuco and then one in the Centex in Valparaiso. The exhibitions will offer visitors a subjective experience of the forest, who will immerse themselves in various sentient worlds marked by biological, social, subjective and spiritual interpretations of the ecosystem. We approach these interpretations from different techniques, such as video, photography, ceramic and performance, seeking to transform these mediated experiences into affective ecologies of the current Wallmapu landscape. Without being caged into a single answer, the curatorship for these exhibitions invites visitors to discover ways to relate to the non-human.
Finally, we are planning on editing a publication that, more than a catalogue, will be a new space to reflect on the notion of the forest in relation to forest plantations.

What culture and which domains do eucalyptus forests represent?
Considering the current state of environmental emergency in Chile, this tree and its historical and geopolitical significance represents a possibility to access a more complex understanding of the conflict, from the questioning of the division between nature and culture.
From the intimate experience of this nature/culture construct that is lived in plantations, we seek to delve into the ways in which this binomial of concepts is represented, as well as how this representation is constituted in knowledge and experience. Specifically, we propose to use art to unravel the perception of the eucalyptus as a natural object (living being) and a technological object (codified for its high productivity). This way, it’s important to consider that, although the categories of nature and culture were inherited from the Colony, they are still used to establish a relationship between human beings and their surroundings. That said, the Chilean case–from where we set forth these reflections–demands to rethink the relationship that is established with nature: how nature is defined, planned, created and changed in this territory. To really understand the forest and the forest plantation, we must go beyond taxonomic descriptions that contrast them with our human condition, and understand the plantation and the forest as part of our inhabiting and being in the world, contemplating the tree as a social, political and historical object, that is redefined from another paradigm that allows us to identify ourselves as nature and experience ourselves as part of it. In this sense, we see a need to break our analytical frameworks to redeploy the idea that “we are the forest”, which we learn from indigenous peoples.

What have your investigations in Bosque Pehuén consisted of and what have been the most relevant findings?
We arrived at Bosque Pehuén with the desire to become affected by those infinite relationships that sustain the notions of landscape; wanting to inhabit and understand the forest beyond the mediated gaze of the camera. We wanted to smell, touch, get dirty and become the forest; feel and think from the perspective of being in that territory. We came up with different strategies that allowed us to be in the forest and think of it, not as taxonomies of species and experiences, but as relationships of connection. We wanted to be present and understand the memory of the forest, from its different elements. In this process, and following some ideas raised by the ecologist Tomás Ibarra, we decided to go, touch and connect with the elements that contained memory. We encountered stumps on the way, which are trunks of trees that existed in the past and were cut down, burnt or had simply fell, but which speak of Bosque Pehuén’s past before it was a site of conservation, when it was a productive field for the extraction of native wood, and that bring visibility to a history that is much longer than the one we can perceive by simply looking at the current forest. By understanding the remains of these trees as reservoirs of memory and new lives, places where ecosystems come back to life, where new trees are born and remain, the limits between the living and the lifeless are blurred, and the interdependence of everything becomes clear.
When creating the ceramic stoneware pieces, which revealed the textures of the tree trunks through the contact between the trunk and the paste, our attention became focused on a dimension of the forest that gradually began to appear. The tree trunk shapes that were imprinted on the ceramic paste were discovered by us with the same vitality as our discovery of the rest of the forest. At the same time, we plotted a grid of markers from our walks through the forest by registering our geolocation during the processes of marking and printing the tree trunks. This was how we recorded the dead/live trees via photography, video, geolocation and ceramic stoneware.
In a way, the research in Bosque Pehuén allowed us to open a new dimension of what we had been researching in Bosques de fuego, in the sense that we could find another forest within the forest, which was formed by the history of the remains of the trees, that now consists of the ecosystem’s internal network. This was a discovery that we were not looking for.

Border Agency is an artistic research project directed by Sebastián Melo, Rosario Montero and Paula Salas, which seeks to explore the limits of landscape, in relation to the territory and its inhabitants. Its objective is to understand, from an interdisciplinary perspective, the ways in which people and places are mutually determined, and to research the power structures that sustain the contemporary notions of landscape. They work internationally and collaboratively, cooperating with various people depending on the characteristics of each project.