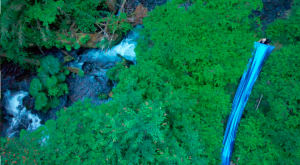 Fundación Mar Adentro: Water has been a central theme of your latest works, such as in Ko ta Mapungey ka (Water is also territory), where the Guñelve appears as a symbol of resistance, facing a land “that doesn’t dry itself; others dry it”. Beyond the colonialist and patriarchal logic present in the management of water, what message does this vital element carry in your work?

Sebastián Calfuqueo: For me, water represents everything, especially our relationship with life. Water inhabits all the bodies present on this planet, it is the basis that makes up each being that is considered “living”. Likewise, water doesn’t respond to binary logic, it is not feminine or masculine. That power of fluidity to me seems so necessary to replicate in many human behaviors – to act more like fluid waters. In addition, we live in a country where water is considered a tradable good since the dictatorship, with a water code (1981) that has created serious water problems that affect both humans and the other beings that live alongside us. This extractive way of relating to water is what needs to change. We must relate in other affective ways, because water inhabits us and we depend on it; we are water.

Do you develop a specific methodology when starting your performance work?
Places are important to me. If I decide to make a performance video, it’s a decision that is directly related to inhabiting or relating to a specific place. To me, performances can only be filmed in a certain space or time that cannot be replicated or repeated. When I decide to perform in front of an audience, the relationship is different; the visuals lose prominence and other senses come to the forefront: smells, sounds, corporeality itself. But every time that I make the decision to perform, it’s because of a relationship with the space where I work, with life and with traveling through places that dialogue or are linked with my body, its history or memory.

What is the importance of transdiscipline in your artistic work?
My training was in a “speciality” school, where you could finish your studies with a degree as an engraver, painter, sculptor, etc. In school, I realized that I didn’t want to dedicate myself solely to one thing, but rather experiment according to what I felt I had to do. For this reason, I consider myself an artist of projects, not techniques, where the idea or “theme” is the starting point of the project and where the technique is a medium to arrive at it.

How did you address the relationship between nature and body in your research in Bosque Pehuén?
It was a beautiful and overwhelming experience. I had previous experiences with forests and spaces with water in the Ngulumapu, but never at the scale of Bosque Pehuén. I think that’s the most important part of this process –to feel small before the immensity of this overflowing nature. There are trees that have inhabited this territory for many years and that make you perceive time and bodies in a different way. I became fascinated with the Salto de la Mariposa waterfall (Butterfly waterfall). My first encounter with that place was amazing, seeing so much water falling, with so much strength and intensity, was impressive. Feeling the mist in that place, seeing the green that lives because of those waters. It was a privilege that few people have the chance of visiting more than once.

You’ve mentioned your interest in including pedagogy as a tool to establish a dialogue with spectators of your work. How do you see contemporary art in general, in this sense?
I think that contemporary art is a free space that allows us to make connections or networks with others. Art is a space for experimentation and learning about life, where artists integrate symbols, ideas or images so that others can replicate or expand on this conversation or vice versa; where the audience has a leading role. Contemporary art allows us to think of the world we inhabit, with all its layers and issues, reflecting on other possible realities or futures, allowing us to question what happens to us.

What is the role of art in the face of the climate emergency?
We are at a turning point in avoiding the destruction of the human species, and our actions against the planet have been so irresponsible that we urgently need to talk about them in both formal and informal spaces. We need an ecocentric turn, where humans are not the center of the world and where the ethical way of relating to other ways of life is to defend their place on this planet. In this sense, art allows us to spread and deepen these reflections, reveal problems or denounce injustices towards the earth.

How is systemic racism expressed in our country’s landscape?
Chile is a country with many open wounds, starting with the process of colonial invasion to the formation of the state of Chile, which in my opinion was the most violent process of dispossession against the various peoples who inhabited this territory before it was called Chile. The landscape is a clear example of this. Since the dictatorship, the lumbering industry has been subsidized by the state and contributed to the destruction of the biodiversity of native species in various areas, both in the North and South. This has impacted large swaths of land that have been devastated by monoculture, where nothing grows and where you could say poverty has been planted. Today, many people don’t know what a forest is or don’t have the privilege of inhabiting one. This is very violent, considering that we live in a country filled with biodiversity; there are those who have prevented others from enjoying the contemplation of or connection with nature. 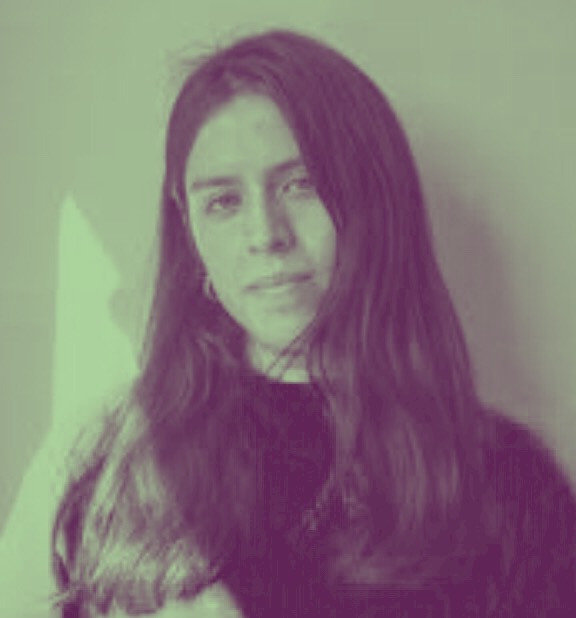 Sebastián Calfuqueo. Visual artist and Master in Visual Arts from the University of Chile. Of Mapuche origin, his work draws on his cultural heritage to propose a critical reflection on the social, cultural and political status of the Mapuche subject within Chilean and Latin American society. His work includes installations, ceramics, performance and videos, with the aim of exploring the stereotypes that occur at the crossroads between indigenous and westernized ways of thinking, and also to bring visibility to issues around feminism and sexual dissidence. He has exhibited in Galería Patricia Ready, Galería 80m2 Livia Benavides, Galería D21, Parque Cultural de Valparaíso and MAC Santiago, among other places.