CYCLE 2 - ECLIPSE of this year’s Bosque Pehuén Residency Program took place between November 16 and December 16, and considered four participants: Elisa Balmaceda (visual artist), Sebastián Jatz (composer and sound artist), Nicolás Aracena (architect and carpenter) and Hanna L. Kaljo (curator and writer from Estonia), who from different perspectives carried out research on sound, the power of words and their connection with this territory, different ephemeral architectural explorations, as well as the use of trap cameras and obsidian stones to explore the phenomenon of the solar eclipse and its effect on Bosque Pehuén. 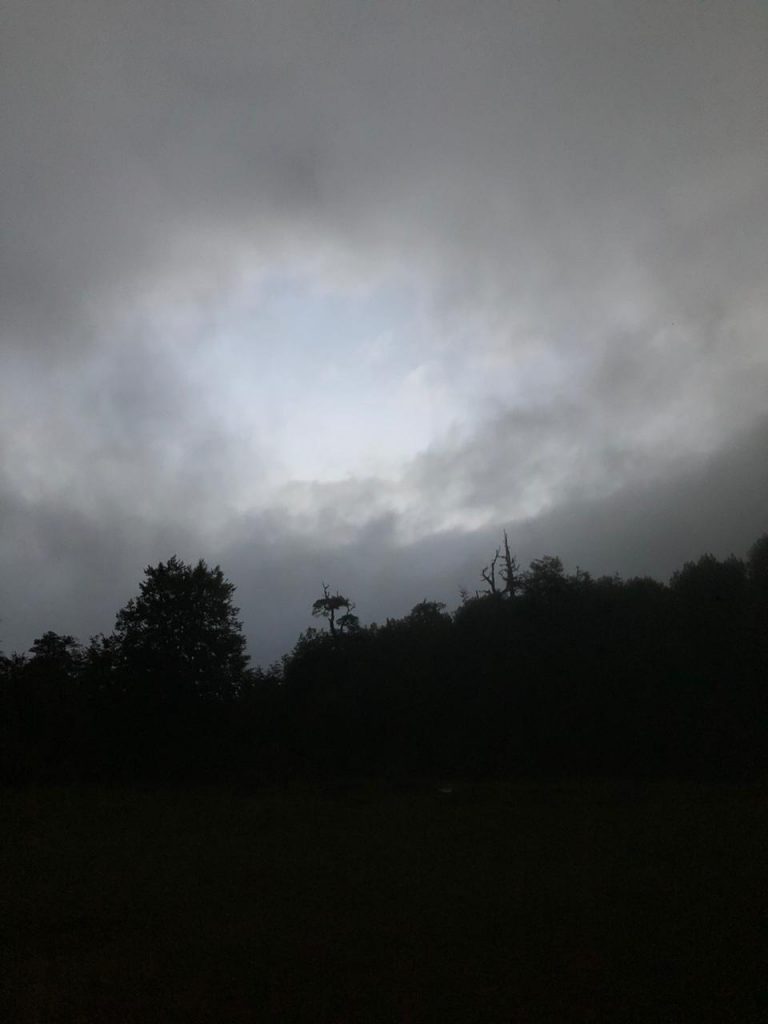 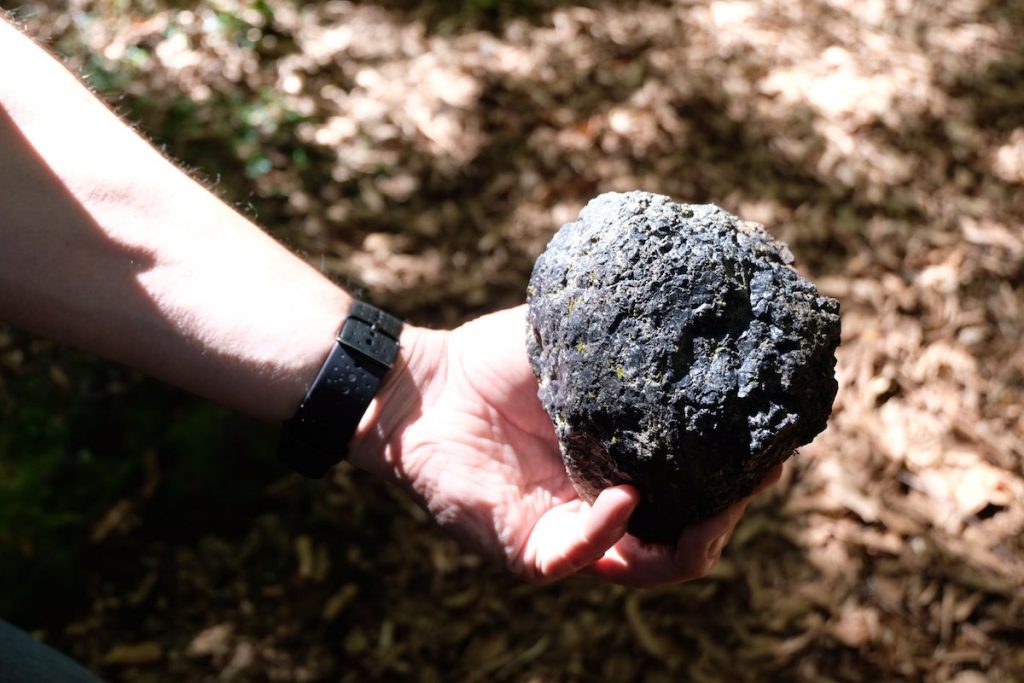 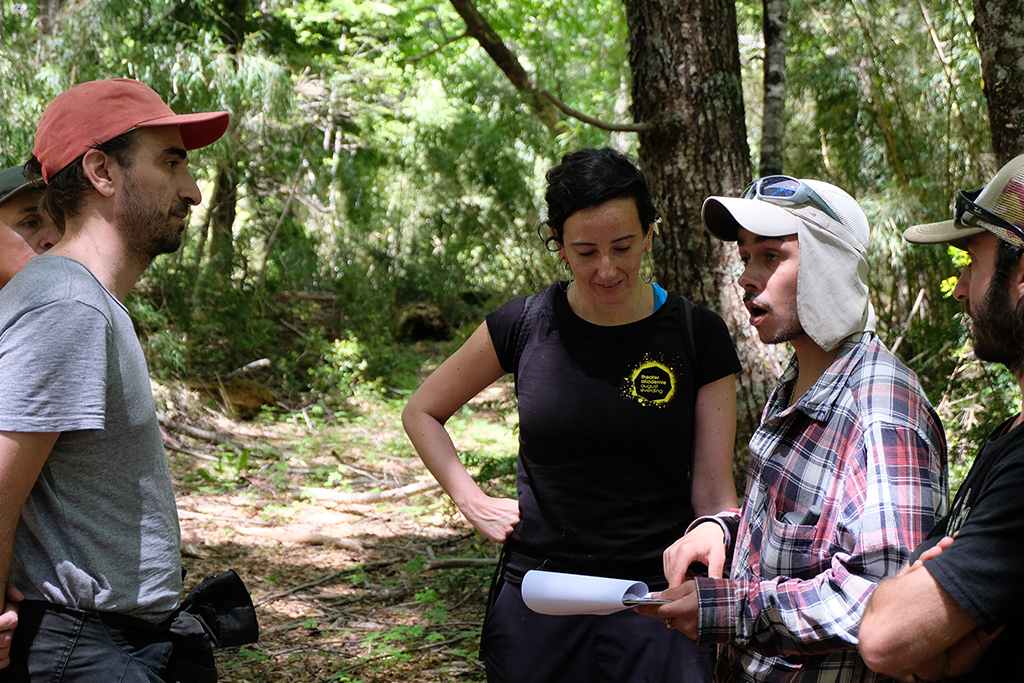 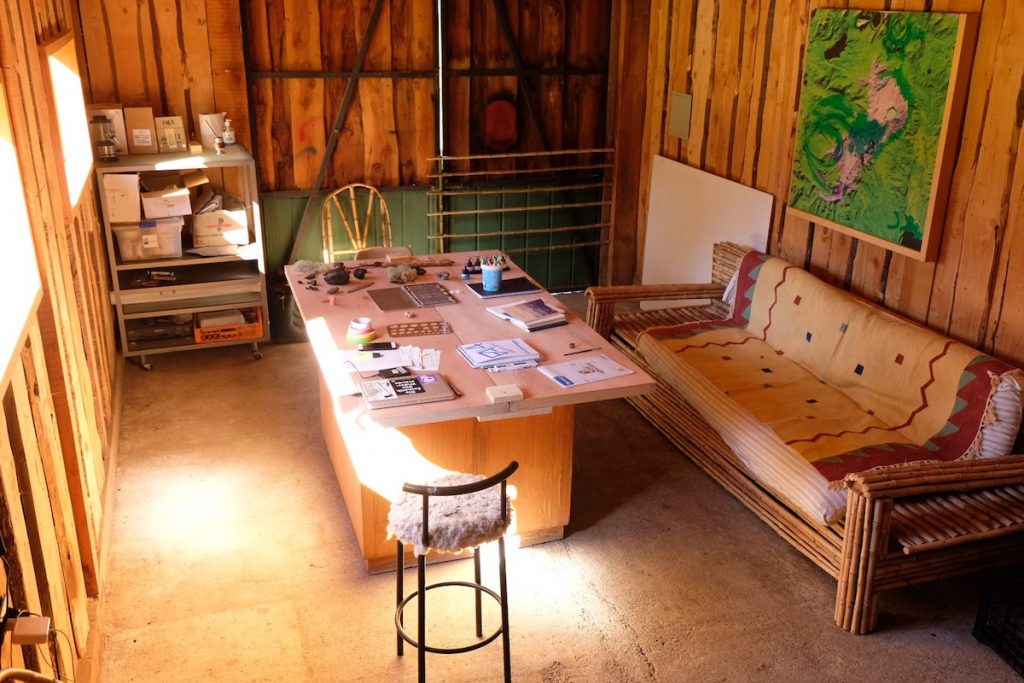 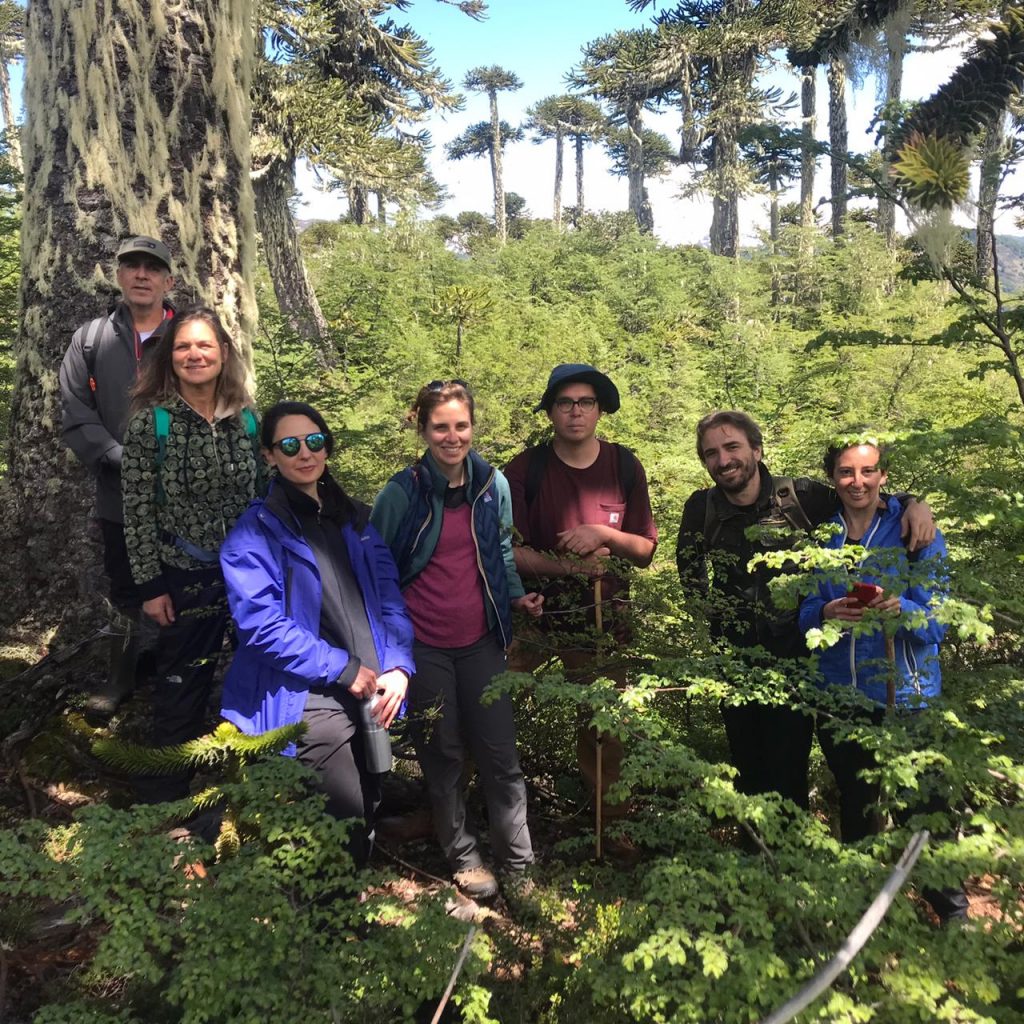 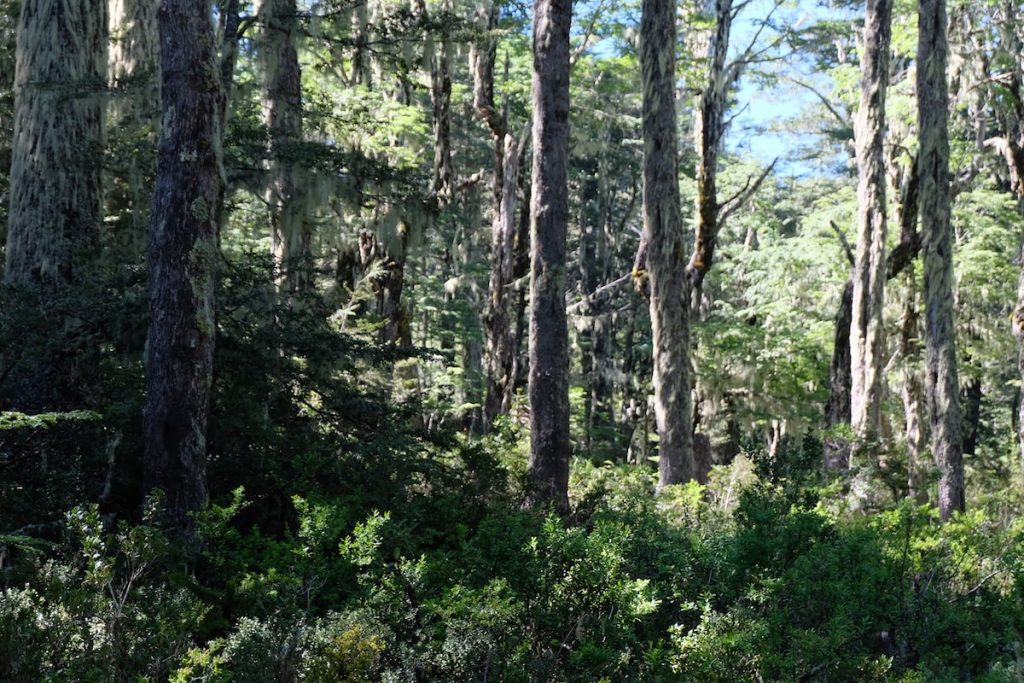 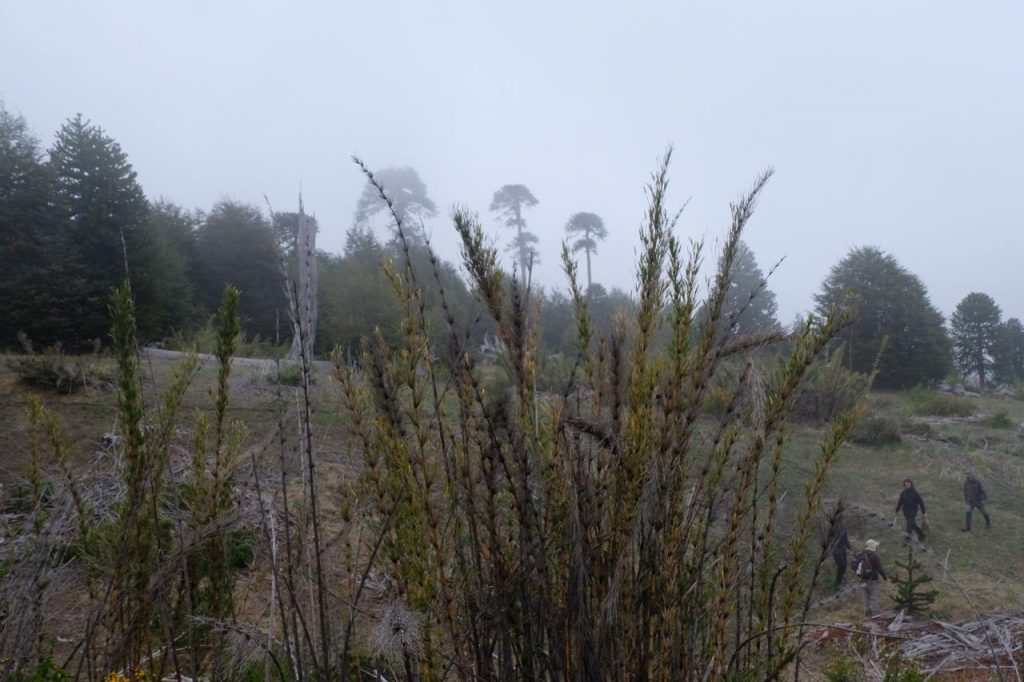 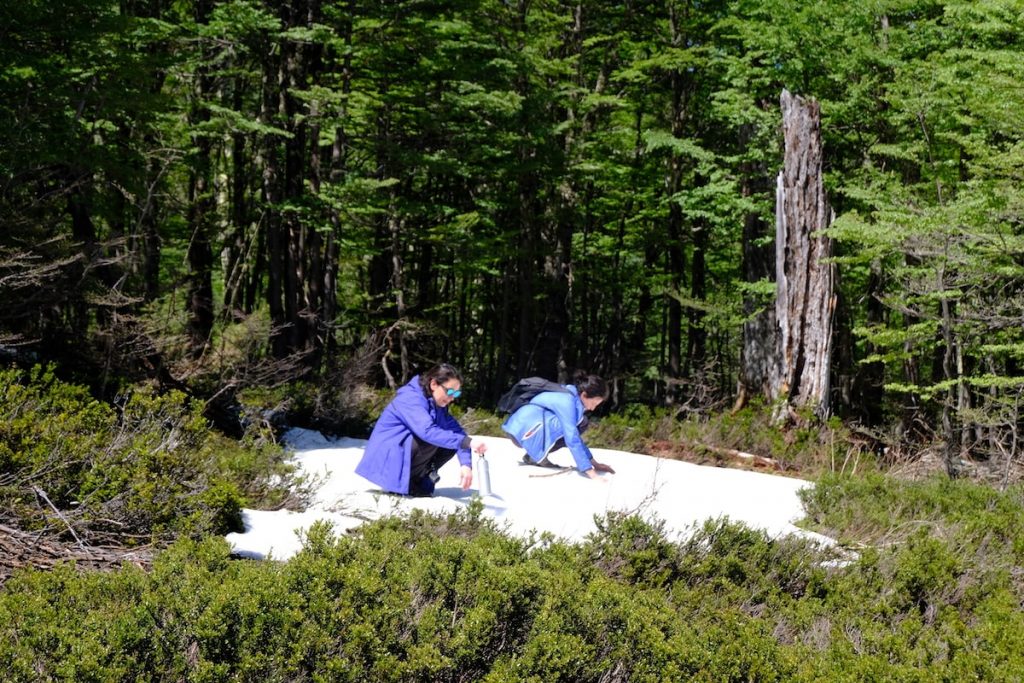 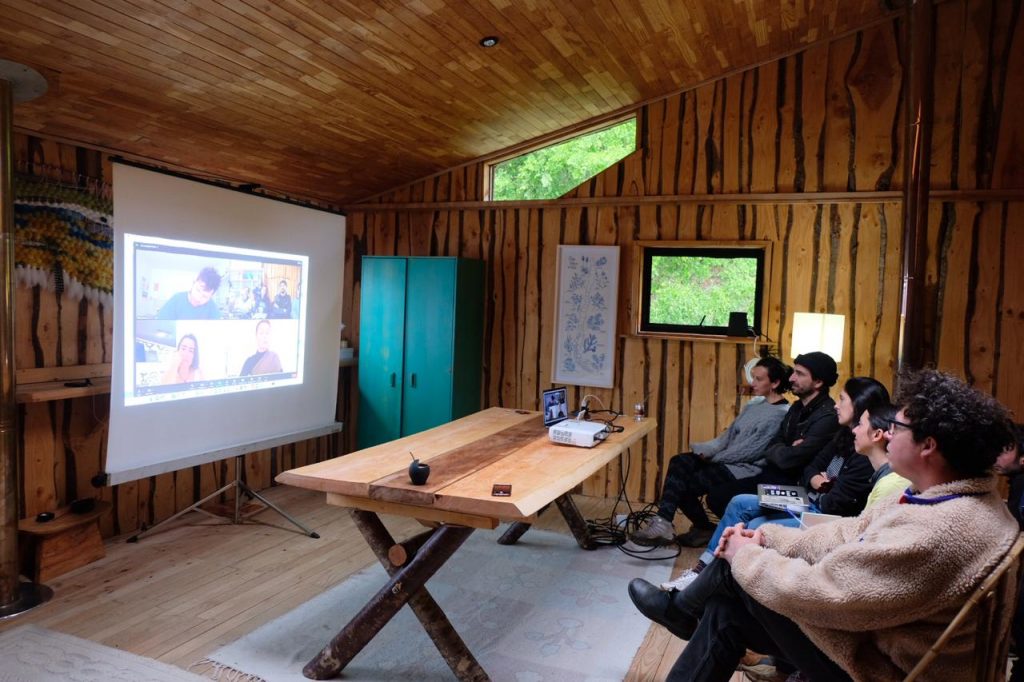 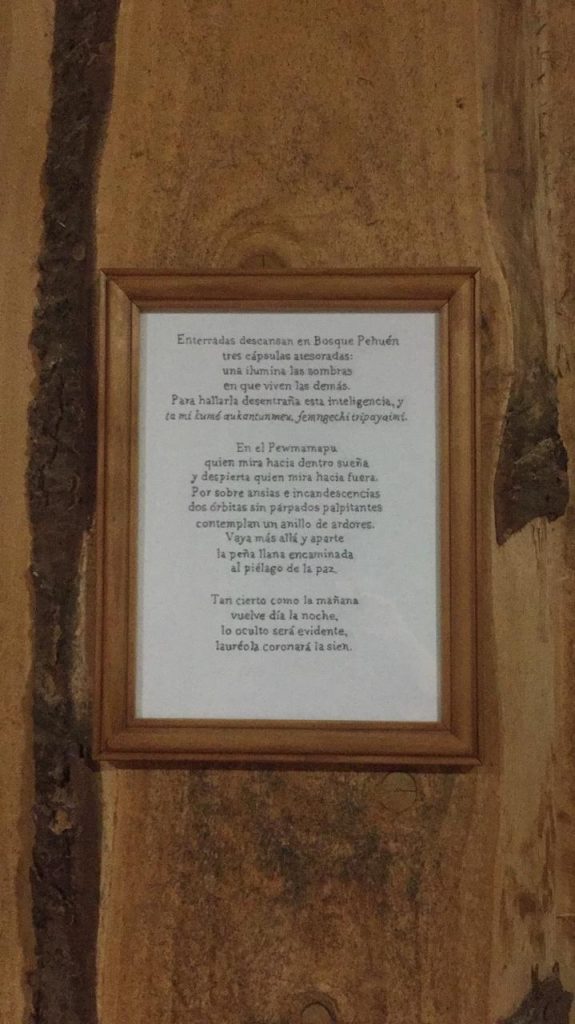 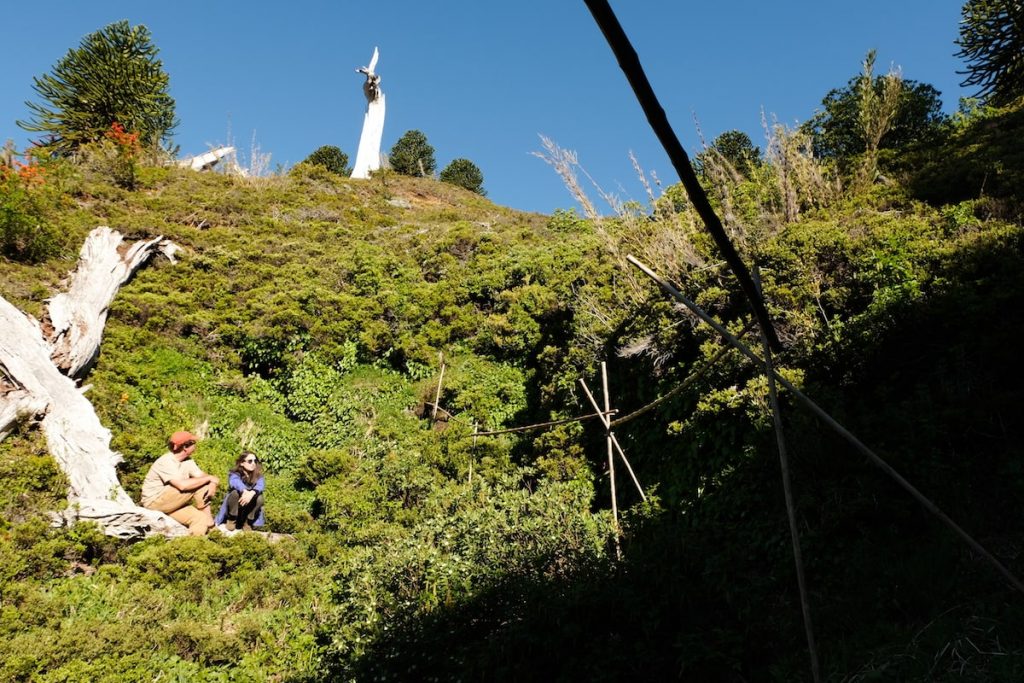 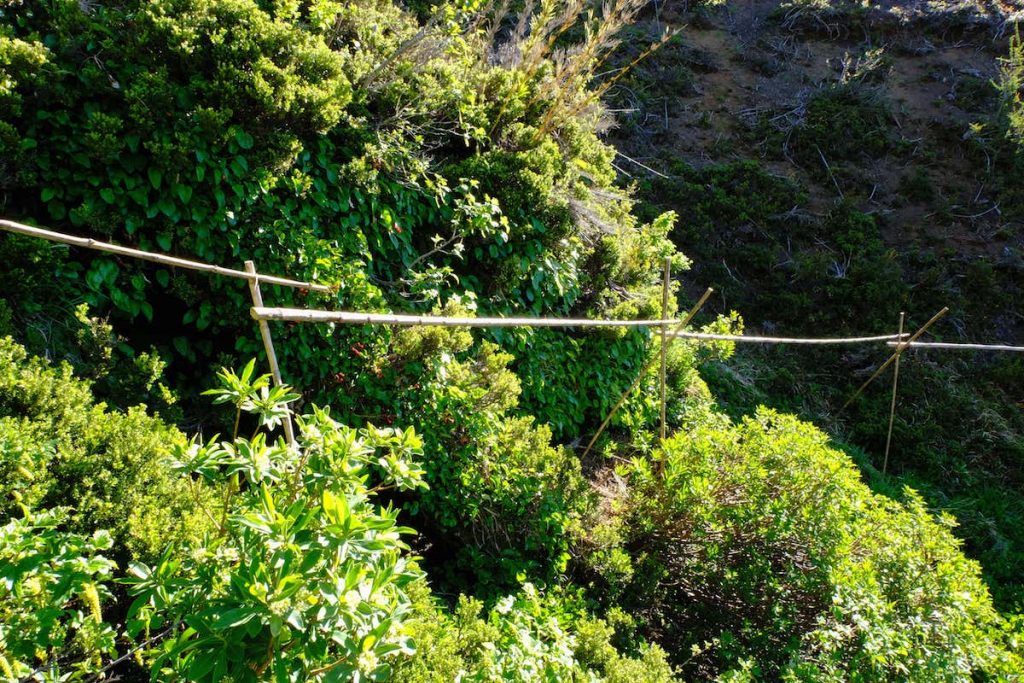 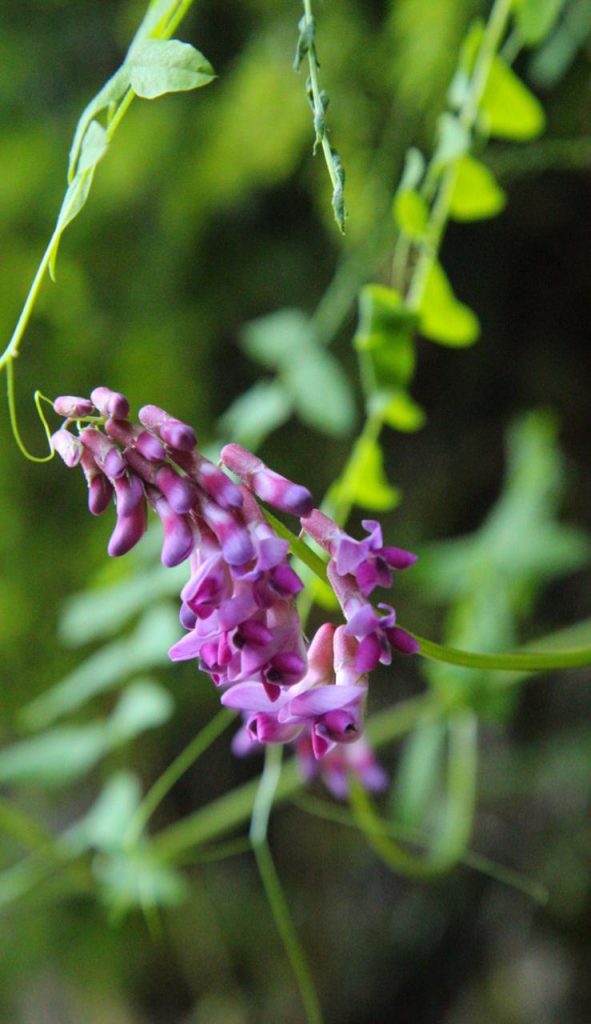 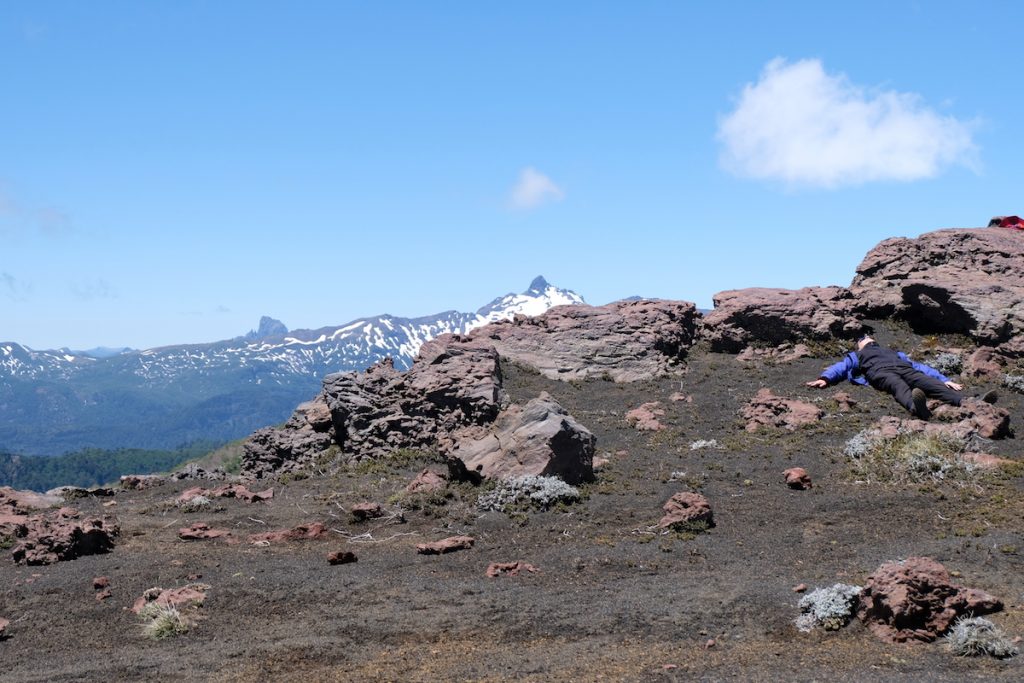 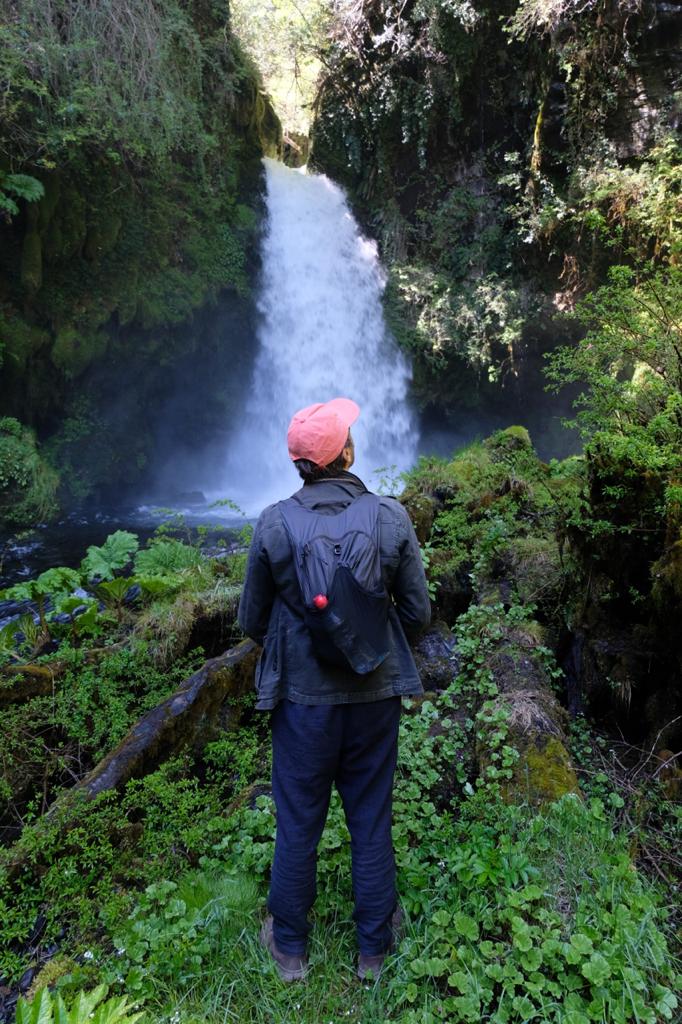 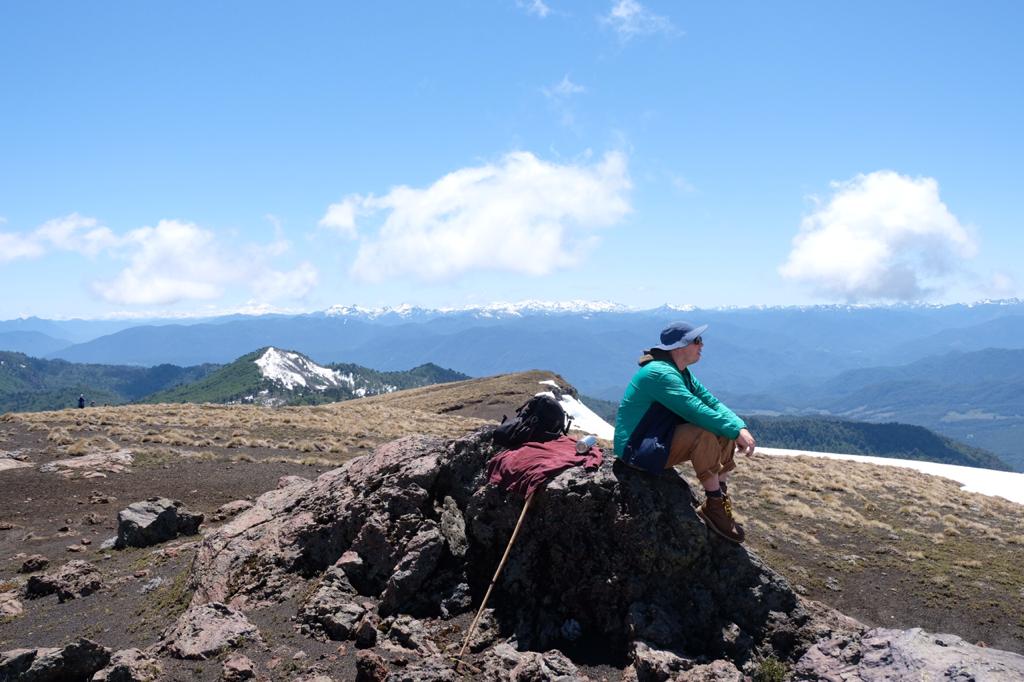 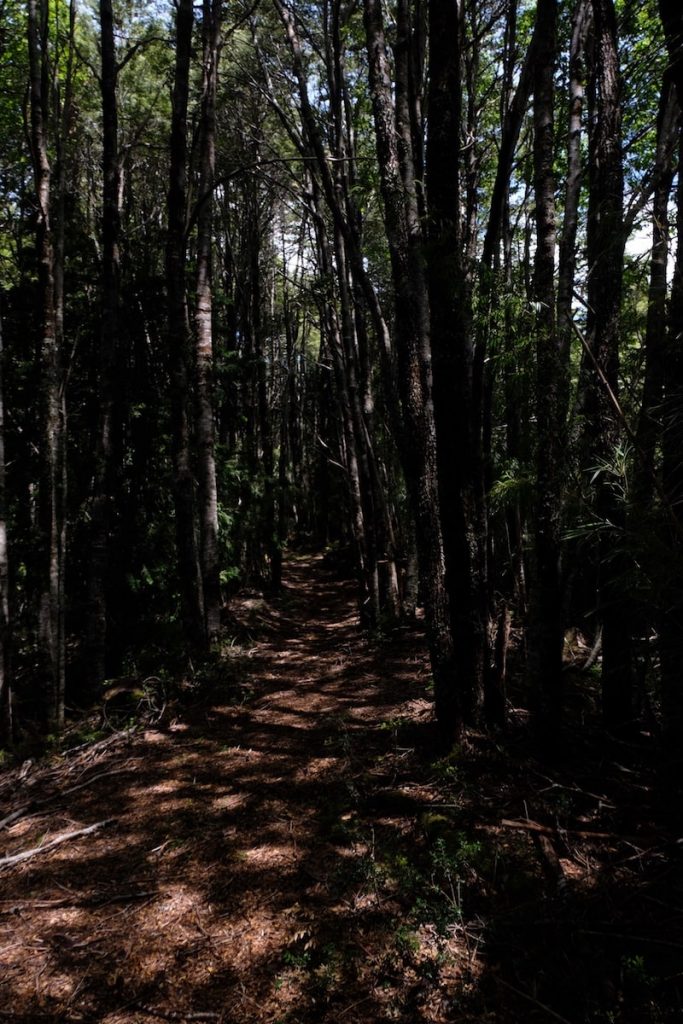 A residency program that was very significant, not only because of the astrological phenomenon of December 14, but also because of the current health crisis amidst a socio-environmental crisis, which inevitably invites us to deeply rethink our relationship with nature. Therefore each of the explorations taken on by the residents–three of them in Bosque Pehuén and one of them off-site from Estonia–reflected on this pivotal moment, archives of ephemeral moments, and the richness of a forest from different focuses and disciplines.

The program included excursions with our Park Ranger, Álvaro Escobar, along the different trails of Bosque Pehuén and dialogue sessions with experts in intercultural education, climatology-glaciology, geology, astronomical visions from the Mapuche worldview, as well as more personalized encounters with different members of our team. 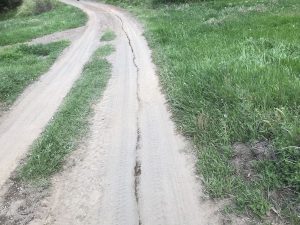 In relation to the research carried out by the residents, Sebastián Jatz together with Fernanda Fabrega explored and exchanged experiences on new forms of “transparent sound” linked to the forest, and as a result developed musical pieces that cast a shadow on the sound of the world. Each of the sound pieces were later buried in the territory, the only thing that remained was a riddle that asks to decipher an intelligence that will be the key to finding these files of transparent sounds. More details about his research in the following link, talk held with the Catholic University of Temuco about the results of his research.

Elisa Balmaceda’s research and explorations focused on the material, symbolic and spiritual conjunction of the biosphere reserve as a living whole interconnected with the total solar eclipse and with observing the landscape, fulfilling her objective to continue expanding her artistic practice around landscape and ecology. Her work in Bosque Pehuén considered the use of trap cameras to document the phenomenon of the eclipse and its effect on the diverse elements of the forest, as well as a geological immersion on the obsidians to explore the dark and hidden as well as their potential as reflectors of an image from above. 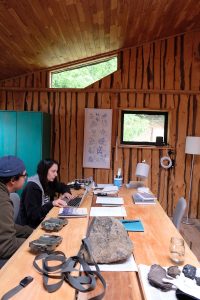 Likewise, Nicolás Aracena focused his research on ancestral furniture materials of La Araucanía Andina and carried out daily construction exercises, placing special emphasis on techniques and unions, using coligüe and other local materials as a basis with the intention of later creating a self-construction guide. He also explored the natural architectures present in the place and the contrast between human and non-human forms and architectures.
As a result, Nicolás and Elisa carried out a collaborative site-specific exercise that considered an ephemeral installation at the highest point of Bosque Pehuén, in the Araucarias forest where the water that creates the local rivers is born. A construction of an 80-meter coligüe line supports only by adhesion and gravity a path of drops of water that travel towards a stone, whose reflection captures the light.

And finally, Hanna Laura Kaljo, who participated remotely from Estonia due to the current health crisis, listened to the oral tradition of the region: sounds, images, feelings and functions of poetry in relation to Bosque Pehuén. She carried out her research through digital encounters with different local actors and members of the foundation’s team on humid temperate forests and their conservation, the development of intercultural education and mapuzungun in educational establishments, making initial connections with Estonian traditions linked to language, for example traditional reiglaul songs and the Mapuche tradition of the ül, as well as the relationship between poetics and conservation.

Hanna also reflected on the value of the forest from the point of view of preserving the imagination, specifically in relation to the psychological development of children, which led to the creation of “A poem with eyes and nose, a poem that has voice ”, a poetry writing exercise guide for schools of the area.

Elisa Balmaceda (Chile, 1985) visual artist, audiovisual producer, teacher and researcher. Her work develops in the form of a transdisciplinary research to explore the human and non-human relation through a material exploration of the landscape, through technology, time-space, the cyclical, ecology and environmental degradation. She has participated in various exhibitions and cultural projects both in Chile and internationally in Argentina, Colombia, Spain, Germany, Belgium, Serbia and the United States. She currently works as a teacher at the University of Concepción in addition to collaborating with various institutions, artists and cultural media in workshops, creative projects and publications, among others.
+ INFO

Sebastián Jatz Rawicz (Chile, 1980) composer, translator and bell ringer. Founder of arsomnis where he creates large-scale projects such as Musicircus, Reunion and John Cage’s ASLSP, among many more. He has made numerous sound interventions, both individual and collective, in public and institutional spaces. His work uses various experimental sound sources, intersecting timelessness, disciplines and reflections from literary, philosophical and even religious spheres. He is also the founder of Campaneros de Santiago and a member of the Chusca collective, formed at the end of November 2019 together with Fernanda Fábrega, Andrés Gaete and Bernardita Pérez.
+ INFO

Hanna Laura Kaljo (1989, Estonia) has been working with words and interdisciplinary curatorial projects through a research-led approach. Writing in both her native Estonian and English, she has explored the living presence of places, phenomena and inner worlds, as in Of Tongues in Shaded Streams (2020). Recent curatorial projects, such as Let the field of your attention… soften and spread out (Tallinn, 2019), have taken the form of contemplative spaces, in dialogue with seasonal cycles and elemental movements. She holds a MFA in Curating (2015) from Goldsmiths College, London, where her inquiry was in conversation with the field of environmental humanities. Her approach is further informed by training in Dance and Movement Psychotherapy.
+ INFO

Eclipse Cycle of the Bosque Pehuén 2020 Program Wraps Up

Sound Investigations in a Forest of the Araucanía