New set of 3 exercises available in Sala Libre 3: downloadable exercises to connect with nature through creativity!

Messages from the Bat God: Towards a Decolonized Art and Education

by: Francisco Schwember - visual artist and Doctor of Educational Sciences 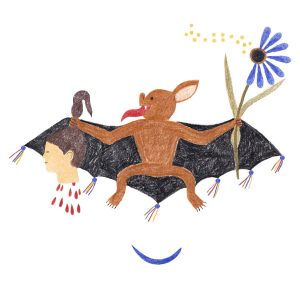 The global health crisis has left a trail of images and ideas that our culture will take time to assimilate: the bodies of the victims and the evident absence of a symbolic space to deal with death; the return of hunger and ‘ollas comunes’ (communal pots); and animals poetically recovering spaces taken over by humans in different cities of various continents, including pumas and condors in our capital city in Chile…

However, there is a particular image that is loaded with meaning for those of us whose work is dedicated to visual production and education, both for its rawness and for the clarity with which it illustrates the consequences of human action in the gestation of disaster. I am referring in particular to the image of a bat being cooked in a broth in a traditional Chinese market, an animal ready to be consumed within a soup plater. With its face deformed in a cruel rictus of pain, similar to that of the shrunken heads of the Shuar, this dish reminds us, in a sacrificial offering form, of the origin of our collective procession.

In ancient pre-Columbian Mesoamerica there was the cult of the Bat God, called Camazotz by the Mayans and Tzinacan by the Aztecs, a divinity associated with the underworld and the mysteries of life and death endowed with the power to heal any disease and cut the silver cord that united body with soul. For the Aztecs, who knew a thing or two of the art of living with death, this image bared a message worthy of being remembered that evoked the fragility of human life.

The ambivalent character of the Bat God in pre-Columbian art, which was razed by the tragic progression of the Conquest and subsequent Colonization, was based on the relationship established by the native peoples with these crepuscular and strange beings who protected their world by keeping insect infestations at bay, taking care of the silver cord that supported human civilization.

The calamity that devastated these cultures, called by the Andean peoples as Pachakuti –total transformation of order and inversion of the hierarchies that organize the world– also ended with the millennial cult of the Bat God. This, largely due to a population that had grown to lack immunity to new diseases brought by the conquistadors.

This has a special resonance in current events when ancient specters remind us, through art, of the inherent fragility of the limits that we blindly cross as a species and the illusory solidity on which our hopes of transcendence as a civilization are founded. This association reveals the same attitude we have with nature anchored in the very foundations of Modernity, a historical process that, despite the temporal distance, combines both events and that is usually celebrated as the origin of a civilization based on reason and progress.

On the other hand, it is more difficult to tackle the hidden –and bleak– side of Modernity, the inseparable and founding reverse side of the achievements of its luminous facet. That which not only refers to the conquest and spoliation of America, to the indigenous extermination and the implantation of slavery on a large scale, but also to the founding of the philosophical foundations that sustained the Scientific Revolution. For Francis Bacon, natura vexata, implied the disposition of man before a nature that had to be forced and harassed in order for it to release its secrets, while the Cartesian dissociation between body and mind, isolated reason in the universe of abstract purity, separating it from those sensual and erotic aspects of knowledge anchored in life experience.

According to Octavio Paz’s observation, we can affirm not only that America was born from an original rape, but that our continent was also the birthplace of Modernity itself, where the senseless destruction of ancient cultures veiled other ways of living, other forms of relating to other non-human life forms, and to think about our relationship with nature and knowledge.

The current COVID pandemic has accelerated time and brought us the future that we did not want to see, announced since the 70s of the past century when various voices warned of the destructive impact of the current development model instilled across the globe. In this context, it is difficult not to read the appearance of this virus as part of an increasingly accelerated cycle of diseases transmitted through zoonosis (contagion of diseases from animal populations to humans), due to both the invasion and destruction of their habitats as well as the industrial management of their populations.

In this way, the cycle of destruction which opened with the Conquest of America and the global birth of Modernity could close with the return of what happened centuries ago, in a new Pachakuti that will take our civilization as it has taken others before. But this is only one of the alternatives that we have as a species, others lie in consciousness and in collaboration from those who bet on the continuity of a civilization from new foundations. There, in my opinion, lie the current challenges that art and education must face.

Fortunately, and despite The Long Night of 500 Years, many of the ways of knowing of indigenous peoples –discarded as worthless manifestations, made invisible and degraded by the “official” culture– survived thanks to the practice and intergenerational transmission of numerous peoples. Recognized today for their heritage value and for their ability to constantly recreate themselves, in all of them a view of the world persists that is diametrically opposed to that prevailing in the West and that has expanded to almost the rest of the world. Therefore, in them, it is possible to recognize a systemic look of reciprocal dependence between humanity and other life forms anchored in the will to honor and protect life and, incidentally, ensure its continuity.

This spiritual disposition towards nature does not constitute mere romantic rhetoric. It is based on the fact that more than 80% of the planet’s biodiversity is protected by indigenous peoples, as well as by sustainable ways of life, long before the term was coined in the West.

For the art and education world, this scenario brings forth a longing and a challenge, to the extent that, as authors Walter Mignolo or Boaventura de Sousa Santos have pointed out, it implies the obligation to question the framework and foundations of our training and rethink our work in a process that in the words of the Ecuadorian indigenous themselves, involves learning to unlearn in order to re-learn.

As someone who was born in an age of penicillin and the incubator, it is foolish to deny the gigantic contribution that science has made in our lives. However, the virus has exposed the weaknesses of our culture and the foundations that support it.

This crisis has revealed the obsolescence of various aspects of our reality, including ways of teaching, anchored in a rigid system inherited from the Roman decury and the standardization required by the Industrial Revolution, as well as a disciplinary dissociation and compartmentalization of knowledge which eludes the integration of wisdom that stems from life experience, in what Maturana and Varela accurately synthesized in their aphorism of all doing is knowing and all knowing is doing.

For both art and education, this context implies integrating the coexistence of knowledge and practices that draw upon various sources to reclaim the best of our mestizo tradition, arising from the encounter of diverse cultural backgrounds –indigenous, African and European–, with the aim of contributing from them the elaboration of proposals that allow us to imagine a hopeful future based on intercultural dialogue and interdisciplinary confluence.

In these proposals it is possible to imagine alternatives where the lines that separate folk, indigenous and contemporary art are blurred, where art that sustains itself as a manifestation of individual genius is questioned in order to integrate the collective construction of knowledge of indigenous traditions. As the so-called Minga in the Andean world and Tequio in the Mesoamerican world suggest: collaborative work based on a common good precedes the formation of America and draws on traditions from the former Abya Yala, that reappears to suggest new possible paths in which we are able to imagine an education for hope sustained in collective action.

Francisco Schwember. Visual artist and Doctor of Educational Sciences, Masters of Arts and Bachelor of Arts in Art Education from the Universidad Católica of Chile. His artist work focuses on the relationship between art, education and the knowledge of indigenous peoples based on a transdisciplinary approach on action research as a methodology for collective work. He has participated in more than 70 exhibitions in Chile and abroad. Francisco currently teaches at the School of Art and for the Master in Cultural Heritage program of Universidad Católica of Chile.