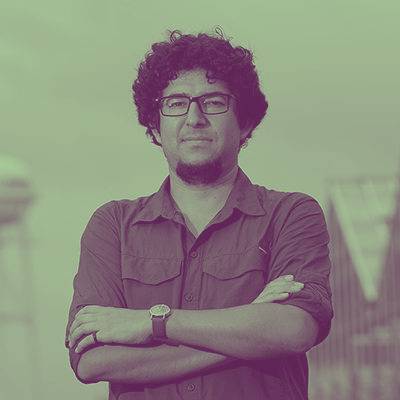 by: Pablo Zamora - expert in plant genomics and co-founder of The Not Company 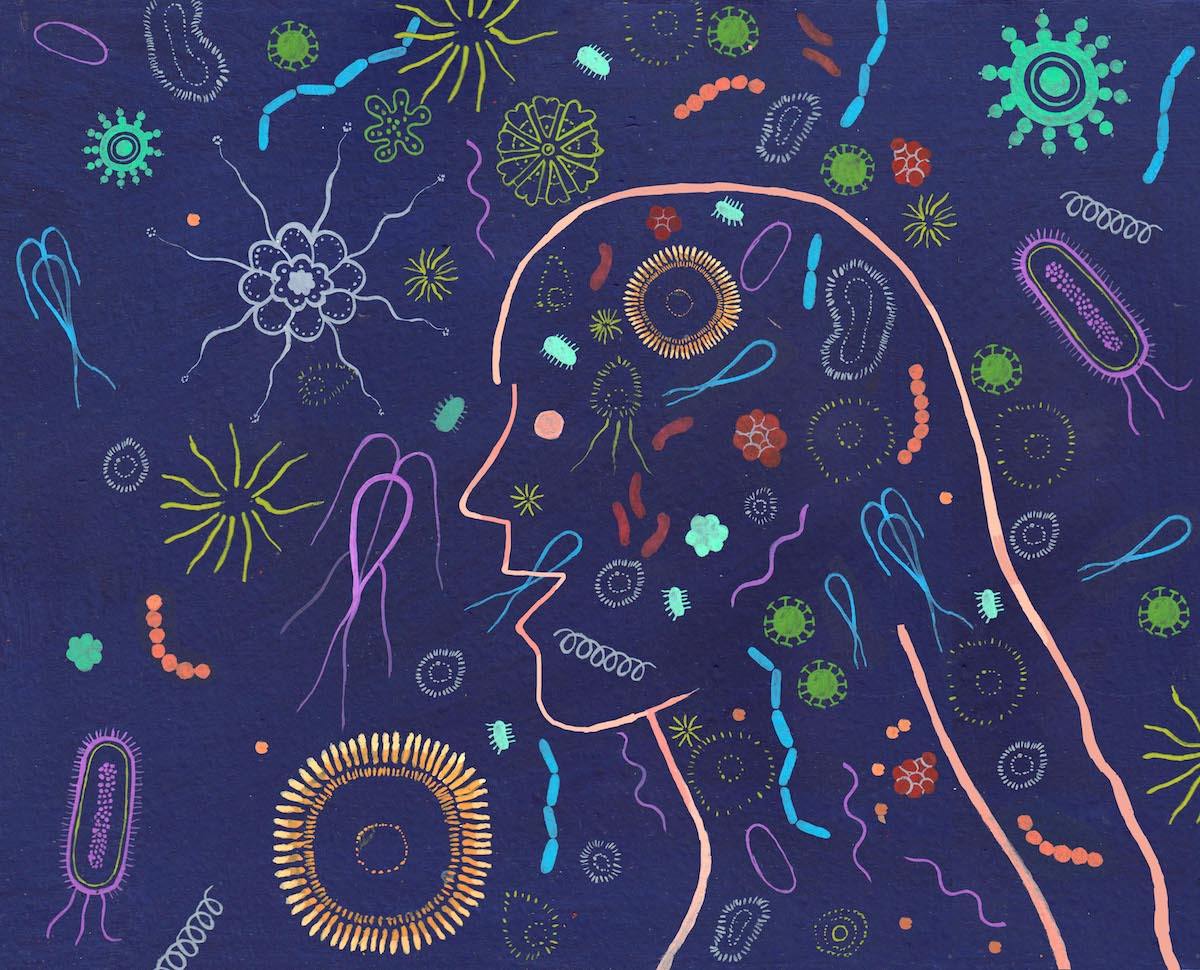 Evolutionary stories of plants, how a virus behaves, and the fragility of our surroundings and systems, are some of the topics that we discussed in these times of confinement with Chilean biochemist Pablo Zamora: expert in plant species genomics, PhD in biotechnology and co-founder of the food tech-company The Not Company, creators of NotMayo.

Fundación Mar Adentro: Tell us a little about yourself, your work and career. You are a founding partner of NotCo where you work as Senior Scientific Advisor, in which your genomic knowledge of plants has revolutionized the food industry, among other things …
Pablo Zamora: As any scientist with a restless mind, I have worked in various territories by means of different research methodologies, among which I highlight working in nuclear reactors, in Antarctica and in the jungle of Central America. One of my last adventures was founding The Not Company, a food-tech company more widely known as NotCo, which attempts to reduce the mass consumption of animal based foods by replacing them with plant and fungi-based nutritional compositions.

What is plant genomics and how is it studied?
Genomics is the study of genomes. It is a relatively new discipline, not more than 20 years old, that tries to understand–using information provided by an organism’s DNA–issues related to the function of their genes, their evolutionary history and their relationship to the environment. To study this, you have to combine molecular techniques and bioinformatic studies that allow us to infer what exists within each genome. It’s a beautiful type of science practice, which allows us to understand–or attempt to reveal–the history of each organism; how it is able to do what it does and eventually who it related to in its evolutionary history. It is through genomics, for example, that we were able to understand that the human genome contains viral and bacterial genes on different chromosomes; a phenomenon that is explained by the lateral transfer of genes between organisms from different kingdoms.

Of those evolutionary stories, which species have you found most interesting to study and why?
There are two biological study models to which I have dedicated a lot of time (about 13 years) and that keep me up at night to this day. The first of these is the so-called Deschampsia antarctica, the only species of grass that grows in Antarctica and which is known to have endured the last glaciation process. Understanding its adaptive mechanisms in extreme environments makes it highly attractive for a scientist. The second amazing model that I found, is an ancient corn that was developed by indigenous communities in the Sierra Norte of the State of Oaxaca in Mexico–very close to the center of corn domestication–called Olotón, and that has the ability to self-fertilize. This giant corn plant is capable of growing over 5 meters high and generates itself through a series of roots above the ground. In addition, it has the ability to capture atmospheric nitrogen and convert it directly into fertilizer for itself. I discovered, that this unique process occurs because the plant related, for thousands of years, to an association with bacteria that converts nitrogen in its gaseous state to ammonia. In short, an absolutely wonderful process of coevolution.

A large portion of your work has also been devoted to microbe genomics and systems biology: what are microbes and how are they related to viruses and bacteria?
It is the life that is everywhere but that we cannot observe through the naked eye. We call microbes all organisms that are not visible to the human eye. There are microscopic organisms from the 5 kingdoms: animal, plant, monera (bacteria), protist and fungi. Viruses do not belong to any of these 5 kingdoms since they are not considered living organisms because they cannot live by themselves. Viruses necessarily require a host or a being infected by the virus that can serve for its multiplication. Bear in mind that viruses, unlike bacteria, have very simple genomes, which means that much of the machinery that the virus needs to multiply is located within the host’s cells, which is why it requires infecting to continue its propagation cycle. 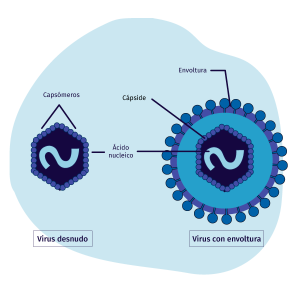 How do viruses behave?
Depending on the virus, viruses exist based on both types of DNA and RNA nucleic acids. They all have the same type of architecture: a nucleic acid enveloped by a capsid and surrounded by an envelope (refer to diagram on right). Viruses generally act in the same way: they recognize the host, enter, use its cellular machinery, multiply, and then spread within the host and attack neighboring hosts. Remember that viruses infect all kingdoms, not exclusively animals. The most compelling example of this, for me, are the so-called “bacteriophages” which are viruses that evolved to attack bacteria.

How does the genomic study of a virus contribute to  discovering more information about the pandemic we are experiencing today? Is it currently being studied?
It definitely contributes, genomics allows us to study the similarity of this coronavirus with other previous types of coronavirus; determine where the recognition specificity of the host and the origin of the virus lie. The main advances in determining that this virus comes from wild animals, such as the bat or the anthill, are due to comparative genomics studies.

There have recently been several articles and columns signaling at climate change and the destruction of ecosystems being a main cause of a greater spread of viruses like the one we are experiencing today: what is your take on this?
Particularly in the case of the ongoing pandemic, I consider that cultural practices and the economic model are much more relevant in its origin, incidence and global spread. Country-city farmer migrations, confinement, lack of education, lack of scientific knowledge and lack of authorities taking decisions based on technical knowledge and not merely political, were the breeding grounds for Covid-19.

Regarding the behavior of global authorities and the current economic model that you mention: Do you believe biodiversity conservation should be explicitly considered in public policies of various sectors?
Of course, it should always be the fundamental foundation of human development. Unfortunately, human beings as a species, in my opinion, forget that they are a part of a system called nature and that we are not above it. Biodiversity should remain and it is humans who should worry about having to generate the least impact on it to carry out its functions, not grow at its expense. If we do not have the conscience to maintain it, clearly that vision must prevail and for this, public policies are necessary.

In moments like the ones we are facing today, what kind of scientific information do you feel civil society should know, manage and become comfortably familiar with?
I think the first thing, is to recognize that science is valuable as long as it approaches the truth and has purpose. Secondly, citizens need to have the ability to believe in evidence and based on that knowledge take decisions founded in coherence with said information, in order to generate conscious action. Today, I think it is essential to understand basic knowledge of evolution, virology, epidemiology and statistics.

What have been some of your thoughts during these moments of confinement with respect to the different methodologies and practices related to your field and how they have possibly drastically changed during this time? Have you thought of potential necessary changes in the long-term?
I think the first reflection is to recognize the fragility of our environment, the fragility of all routines and their projections. For all scientific work, the pandemic has certainly provoked a setback, however, there is a lot of science that is developed, financed and dedicated to defending no other purpose than to resolve the intellectual concerns of the authors of said research, and this contrasts sharply with the need to generate knowledge and solutions to problems as deep as the threat to our species and its way of life. I think it is an opportunity to rethink our social role, our interactions and our way of functioning as a species; a very deep process that must be done from solidarity, if not we don’t we will not come out of this well.

Pablo A. Zamora. Biochemist and PhD in Biotechnology from the University of Santiago de Chile. He has specialized in topics related to translational research models, access to genetic resources, plant genomics, artificial intelligence and intellectual property. Pablo has been an academic, researcher and director of Applied Research Centers and Innovation Centers at the University of California Davis, as well as being an advisor to companies, universities and international organizations such as OAS, FONTAGRO, among others. In the field of entrepreneurship, Pablo has been active, being the co- founder of the food-tech company The Not Company (he is Senior Scientific Advisor) and also of socially focused company, Vincula S&C.

*Illustration of interview was created by Francisca Álvarez.