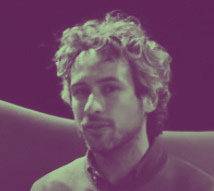 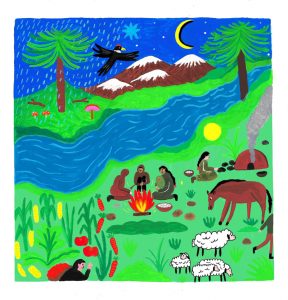 The relationship between science and history, heritage, the Mapuche society –indigenous habitants of present-day south-central Chile and southwestern Argentina–, and capitalism, as well as the devastation of the ecosystems, were some of the issues we discussed with Diego Milos: chilean anthropologist who’s most recent and highly acclaimed work consisted in analyzing and translating naturalist Claudio Gay’s manuscript about his journey through Chile in the 19th century, which was published in 2018 as Usos y costumbres de los araucanos (on the uses and customs of the araucanos).

Fundación Mar Adentro: What are your primary interests in anthropology and what has been your primary focus or subject in recent years?
Diego Milos: Over the past 15 years, I have mainly focused on science and the Mapuche society, which may sound like topics that have very little in common, but in my experience they have been closely related because of their history, particularly during 19th century history. I began my line of research on the Mapuche of the decades before what is known as The Pacification of the Araucanía. While revising documents to understand what happened between 1840 and 1860, I came across descriptions by Claudio Gay, who was in Chile at that time and visited the Mapuche. Immersed in the scientific perspective of his time, he was also interested in various phenomena such as observing, classifying plants, animals, and human beings based on their differences and similarities. That’s when I also shifted my research not only on the Mapuche, but also on the point of view of the observer of the Mapuche–in Gay’s case, the “natural history” point of view–which drew me to ask more general questions about scientific cultures: how scientists construct their truths and how they succeed or fail to communicate them to society. A relevant topic in these times of natural breakdowns, just like we saw with Covid, where various and contradictory measures were taken (from the WHO to every other actor below that), but they were always rooted in some form of expert knowledge.

You recently edited Usos y costumbres de los araucanos, a manuscript written by the French naturalist Claudio Gay in the 19th century, where we find a detailed description of Mapuche practices. We can safely say that it describes an anthropological mode of work that crosses many disciplines; an invitation to approach knowledge from various perspectives. Do you believe interdisciplinarity is common in anthropology today?
Exactly, Gay’s mastery over the multiple disciplines of his time (botany, zoology, mineralogy, chemistry, paleontology, statistics, drawing, etc.) is quite remarkable when compared to today’s scientists. What I mean by this is not in regards to a lack of capacities on behalf of scientists today, but more so a comment on the “ultra-specialization” of the disciplines and sub-disciplines of natural sciences that has been occurring since the 1870s. Over the past 30 years there has been an effort to form more interdisciplinary teams, which is good, but it is still different from Gay’s situation, because he was able to incorporate knowledge of various disciplines and put them in relation to each other to arrive at new discoveries. I believe it is more interesting to learn diverse types of knowledge rather than to bring together various specialists forced to speak out on behalf of their discipline. Because, reality is not compartmentalized in segments where one can say ‘you take care of this, I take care of that …’

How does Gay describe the Mapuche view on the interrelation between nature and culture?
I don’t know, but surely they would not view them as separate. If you look back into the book you’ll notice that the word “culture” appears only once, and it is to refer to the cultivation of plants, to agri-culture. The distinction between nature and culture is a construct of 20th century anthropology, consecrated by Lévi-Strauss, to whom we owe a lot, but who is at the same time rigorously criticized by some contemporary anthropologists. Philippe Descola and Eduardo Viveiros de Castro–separately and among many others–have argued that the distinction between nature and culture is a western construct, and that other cultures have other distinctions to separate the inside and the outside, the us from the them, the human and the animal, the forest from the house, the world of the living and the world of the dead, etc. The section “Knowledge and Beliefs” of Usos y costumbres de los araucanos, specifically the chapter on Religion, talks about this.

What determines that a cultural expression becomes heritage?
The transformation of any object into heritage is a human decision, socially co-created. It is a legal act that has very ancient roots, of course linked to religion (sacred objects or fetishes), to the Roman idea of heritage (the material and symbolic heritage publicly displayed) and ever since the French revolution to the public idea of heritage, that is, what is valid for the society and not for a church, a family or a private collector. Nowadays, it is like a secular sacralization, to describe it in few words, and the decision is taken by agencies created by the State for these purposes, such as national monument councils, subdivisions of museums and archives, and other cultural institutions (as is the case in Chile) distributed throughout the country. Any citizen can propose cultural expressions deemed important for a community or society as a whole.

What has the patrimonialization of indigenous cultural practices generated in our country?
In relation to specific practices it is definitely complex, however I do not know the effect it has had over the intangible heritage. With material or ‘tangible’ heritage, there have long existed categories linked to archeology and more recently to the valorization of works by indigenous artists and artisans. There is a growing interest in these objects, despite that they are very difficult to classify.
In moments like the ones we are living today, in which social, environmental and economic changes become urgent in face of this crisis, it seems as though we need to begin to learn and understand new forms of social order and decision-making; to rethink forms of leadership and governing people or simply to find other ways of generating social fabric.

In this sense: what paradigms or aspects do you believe would be important to learn from the Mapuche?
It is true that the ways of traditional life, rural or indigenous, makes us see how destructive capitalism is on ecosystems and how alienating life in the city can be. But I think that the problem is ours, we have a democracy that does not have the power to protect these communities and their territories from economic interests, and we should neither need the Mapuche to see it, nor expect a paradigm or an exit door from them. Moreover, they have already spent many, many years trying to solve problems they did not cause. Nevertheless, I do believe it is hopeful to realize that many societies, as Claudio Gay shows with the Mapuche, have managed to live in abundance and social order for centuries, without courts, prisons and police, the three institutions that have caused the most harm to the Mapuche society since the Chilean occupation, and especially since 2001, with the emergence of the Anti-Terrorism Law. It is unfortunate that the moment of greatest need to understand Mapuche history and learn from their culture is also the moment of greatest state instated violence.

Diego Milos. Social anthropologist from Universidad de Chile and did his Master 2 in sociology in the School for Advanced Studies in Social Sciences, in Paris (EHESS). In these universities, he has carried out documentary studies on the Mapuche society and European 19th century science. Recently, he has worked in Servicio Nacional del Patrimonio of Chile and published articles on culture and politics for Chile as well as international press. Editor and translator of the book Usos y costumbres de los araucanos (Taurus, 2018), written by the French naturalist Claudio Gay in the 19th century.